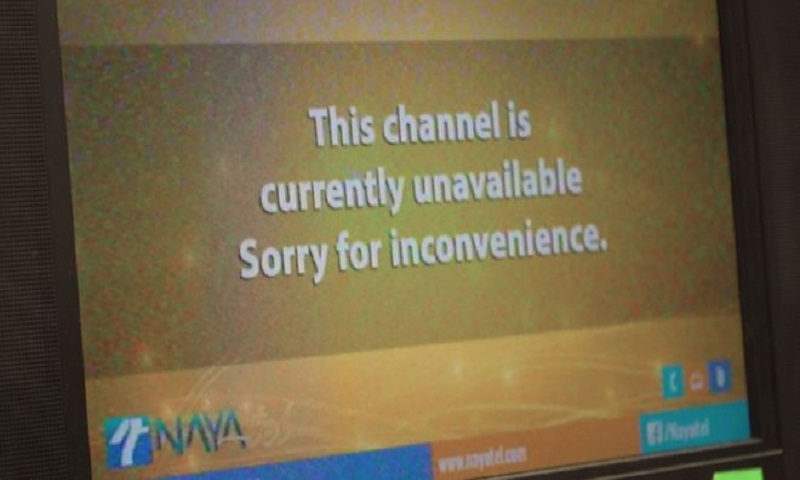 The interview, between one of Pakistan's best-known TV news anchors, Hamid Mir, and leading opposition politician Asif Ali Zardari, was only a few minutes into its transmission when it was suddenly interrupted by an unscheduled ad break and news bulletin.

Mr Mir vented his frustration on Twitter, blaming unnamed censors. "We are not living in a free country," he said.

Just over a week later, another TV interview, of another opposition politician, Maryam Nawaz Sharif, cut to an unexpected ad break midway. When the break ended, instead of Ms Sharif, viewers were presented with an old interview of a leading figure from the ruling party.

The journalist conducting the interview, however, continued with his questions, broadcasting instead online via a video streaming app.

These are two of the most prominent examples of what has been termed "unannounced censorship" in Pakistan. Last week journalists held protests outside press clubs in major cities across the country demanding an end to restrictions on what they publish and broadcast.

Supporters of the government claim the complaints are made by biased journalists. During a visit to Washington this week Prime Minister Imran Khan dismissed allegations of censorship, telling reporters: "To say there are curbs on [the] Pakistani press is a joke."

However, there appears to be clear evidence of attempts to prevent criticism of Mr Khan's government and the Pakistani military, as well as to suppress claims by his political opponents that they are being unfairly accused in corruption cases. Pakistan is ranked 142nd out of 180 countries in the 2019 Reporters Without Borders Press Freedom Index.

The Pakistani Army denies having any role in media censorship.

The clampdown on press freedom inside the country contrasts with attempts by the Pakistani authorities to improve their foreign relations, notably with the US, Afghanistan and India. President Trump has praised Pakistan for its role in facilitating peace talks with the Taliban.

One of the main targets of the current censorship blitz is Maryam Nawaz Sharif, whose father, former Prime Minister Nawaz Sharif, is serving a jail sentence on corruption charges.

Earlier this month Ms Sharif released a secretly recorded video of one of the judges who had convicted her father, apparently admitting he had been blackmailed into finding him guilty. The judge subsequently denied the claims, saying the video had been "edited", but a number of channels who broadcast Ms Sharif's news conference were later taken off air for several days. At other times, parts of speeches from Ms Sharif's rallies broadcast on television have been muted.

One journalist, who asked to remain anonymous for his own safety, told the BBC how censorship worked. He explained that TV channels broadcast live programmes with a delay of at least about 10 seconds, with "an employee hovering over the mute button".

He said topics that would require muting - or if a whole segment was too controversial, a quick cut to adverts - included criticism of the government or Pakistan's powerful security establishment, which is supportive of Imran Khan's administration.

Failure to comply, the journalist told me, would result in angry phone calls or visits from members of the Pakistani army or intelligence services. Instead of threats directed at media workers, pressure tactics would be applied to the channel itself. "Advertising agencies get told, 'Don't them give ads.' Cable operators get told to change the number the channel appears on, or just to shut them down completely," he said. "They've got their hands around our throats."

However, it would be wrong to suggest there's a complete blackout on all political criticism on the airwaves. Prime Minister Imran Khan has claimed he has faced "unprecedented" personal attacks in the press. Meanwhile opposition politicians, other than Maryam Nawaz Sharif, do still regularly appear on talk shows.

"We are a democracy on paper… you can't do an Egypt here by imposing a blanket ban," said media analyst Adnan Rehmat.

Censorship in Pakistan, he said, was aimed at restricting interviews of "the top leadership" of opposition parties and coverage of their rallies. But "second- or third-tier" figures were allowed to take part in TV programmes as they are "not newsmakers". The application of censorship varies in intensity, Mr Rehmat added. Sometimes it is "heavy-handed" and at times more subtle.

In the lead-up to last year's general elections in Pakistan, journalists faced similar pressures from the intelligence services, again in an often haphazard fashion. A leading TV channel was taken off air in large parts of the country for a number of weeks, while the best-known English language newspaper had its circulation severely curtailed.

At the time, the censorship seemed designed to prevent discussion of allegations that Imran Khan was being helped into power by the security establishment. Now that he's prime minister, many observers have suggested press freedom has further deteriorated.

Speaking to the BBC, TV anchor Hamid Mir, who was shot and injured in 2014, labelled Imran Khan's government "a civilian dictatorship" alleging "censorship is increasing day by day".

But he was also critical of opposition political parties for their attitudes towards journalists while they were in power. "They always played double games, and now they are paying the price," he said.

Mr Mir knows firsthand how dangerous life can be for a journalist in Pakistan. He survived an attack by the Taliban in 2012 and in 2014 was shot six times in the abdomen and legs by unknown gunmen.

Mr Mir famously accused elements with the powerful Inter-Services Intelligence agency of being behind the 2014 attack, which the ISI furiously denounced as a baseless claim.

Imran Khan has flatly denied that censorship exists in Pakistan. He has suggested that certain media outlets have a vested interest in undermining his government and supporting claims from opposition politicians that corruption charges against them are politically motivated. While in Washington he accused one unnamed channel of doing everything it could to "protect" former Prime Minister Nawaz Sharif while he faced trial.

A series of tweets from his party's official account earlier this month acknowledged that press freedom was "a building block of democratic society". However it added that "regurgitating propaganda to serve vested interests, running character-assassination campaigns… undermine freedom of press."

Reports in Pakistani newspapers have suggested the government wants to place a ban on attempts by the media to "promote the narrative of convicted persons". Former President Asif Ali Zardari, whose interview with Hamid Mir was taken off air, is currently facing trial on corruption charges, while Maryam Nawaz Sharif is on bail pending an appeal against a conviction in an unrelated corruption case.

After Mr Zardari's interview was cut short, the government's Special Adviser for Broadcasting Firdous Ashiq Awan told reporters it had happened because Mr Zardari was in jail pending his trial and is only supposed to be allowed out to attend parliament.

However, officials from Pakistan's broadcasting regulator told the BBC they had not ordered the interview be taken off air, and said no decree banning "convicted persons" had yet been issued.

Mr Mir said he held both the security establishment and Imran Khan's government responsible for the clampdown on press freedom, as they have acknowledged they are "on the same page" on all issues.

The Pakistani army denies interfering in politics, but many journalists believe it remains the driving force behind the censorship, describing criticism of the army as a "red line".

Broadcast of the TV bulletins of the US government-funded Voice of America has been indefinitely stopped in Pakistan, a move many believe is linked to coverage of a protest movement alleging human rights abuses by the security forces. Rallies by the Pashtun Protection Movement group receive almost no coverage at all, despite attracting significant support in the districts bordering Afghanistan.

The journalist who spoke anonymously to the BBC about the censorship at his channel said the military was influencing both what isn't said on air, and what is said. "Things are so minutely monitored… forget Imran Khan, forget the army chief, if they even see a statement by the information minister they like, they'll send you a screenshot and tell you to run it as breaking news.

"I often say, the only thing that's left is for them to send a brigadier to anchor the news."