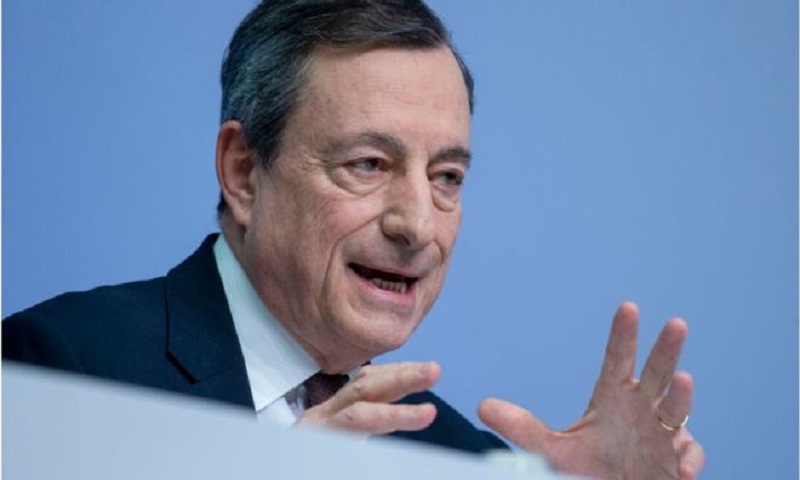 The European Central Bank has hinted it could cut interest rates to tackle a slowdown in the eurozone economy.

It said a weak manufacturing sector and uncertainty over Brexit and trade threatened to derail growth in the bloc.

The ECB, which kept interest rates on hold on Thursday, said it saw rates at current or lower levels until mid-2020.

It is also considering other measures to support the eurozone, including resuming quantitative easing.

This is when a central bank pumps money into the economy by buying up bonds and other assets.

Eurozone interest rates have been held near zero for years to stimulate growth, and the bank had hoped to raise them gradually.

ECB boss Mario Draghi said there were some bright spots in the eurozone economy, such as in services and construction, but added that "the outlook is getting worse and worse", especially for manufacturing.

He blamed uncertainty caused by trade tensions and "the possibility of a hard Brexit".

"There is far and wide nothing to be seen of the second-half recovery hoped for [in the eurozone] in many places," said Commerzbank economist Joerg Kraemer. "Germany is in a grey area between a marked growth slowdown and a recession."

The euro fell after the announcement, trading down about 0.31% against the pound at 88.96p.

The ECB has already used up a lot of firepower in stabilising the eurozone economy, pumping trillions of euros into the bloc through quantitative easing.

However, experts say it is reaching the limits of what it can do.

The US Federal Reserve is also expected to announce a rate cut this Thursday after warning of growing risks to the global economy.

Last week, boss Jerome Powell told US lawmakers that "uncertainties about the outlook have increased", citing weakness in other major economies and trade war worries.