Budget for 2034 will be of a trillion dollar: Kamal 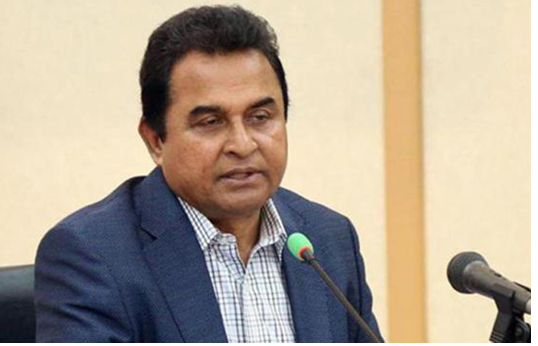 Finance Minister AHM Mustafa Kamal said that the national budget in Bangladesh for the year 2034 will reach around a trillion US dollar.

“We’ve given over Taka Five lakh crore budget for FY20. By 2034, the budget for Bangladesh will be a trillion dollar, Insha Allah. You’ll have to
have confidence in it,” he said.

The Finance Minister was addressing the closing ceremony of the two-day Good Project Implementation Forum organized by the Asian Development Bank (ADB) held at the Bangabandhu International Conference Center (BICC) in the city.

Referring to the indicative budget amount for 2034, Kamal said, “It’s gettable and it’s coming up and people will get the benefit of it. It’s a dream and we all together will materialize it,”

He said the main area of concern and focus of Bangladesh is to achieve the targets of SDGs by 2030 and to become a developed country by 2041.

Recalling his sufferings during the dengue fever for which he could not fully deliver the last budget, Kamal prayed to Almighty Allah so that no one
is infected with dengue virus anymore.

The Finance Minister also announced that two top officials of the awarded projects by ADB would be sent to countries like Vietnam, India and
Singapore to gain more experience.

ERD Secretary Monowar Ahmed asked the local officials of the awarded projects to keep this in mind that this is recognition of their good job and performances as well as to share their good practices with their other Bangladeshi colleagues.

Earlier, the Finance Minister distributed awards to the best performing projects and delegates.

ADB this time awarded its good performing project teams in Bangladesh under 10 different categories as part of efforts to promote efficient project implementation. SASEC Road Connectivity Project became the best performing or champions of the champion project by ADB.

Over 300 participants from project executing and implementing agencies of Bangladesh, Bhutan, India, Indonesia, Nepal and Sri Lanka attended the forum with the theme “Delivering Better Project Outcomes” and shared their experiences, best practices and lessons learned from implementation of
various projects.

The forum is first such initiative in Bangladesh to promote South-South Cooperation.

Parkash said in the ADO supplement issued couple of days ago, the ADB has upgraded the economic outlook for Bangladesh from 8 percent in FY19 to a record 8.1 percent, highest in Asia-Pacific. “This is a remarkable achievement given that the current global outlook is challenging”.

Further, he said the ADO supplement predicts Bangladesh to sustain the highest growth in the Asia-Pacific at 8 percent in 2020. “Friends, I call
Bangladesh a ‘Land of Opportunity’. This is because the country has made tremendous progress in a very short period. Despite a difficult global economic outlook, Bangladesh continues to progress at a high rate”.

The ADB Country Director said under the bank’s newly approved Strategy 2030, ADB will strengthen its country-focused approach and promote innovative
technologies to deliver integrated solutions, combine expertise across a range of sectors and themes through a mix of public and private sector operations, and innovative high impact projects.

The best project team recognition program was initiated in 2001 and has been a regular annual exercise by ADB to promote development effectiveness of ADB-assisted projects in Bangladesh.