Want to remain unstoppable to bring pride for country: Alakesh 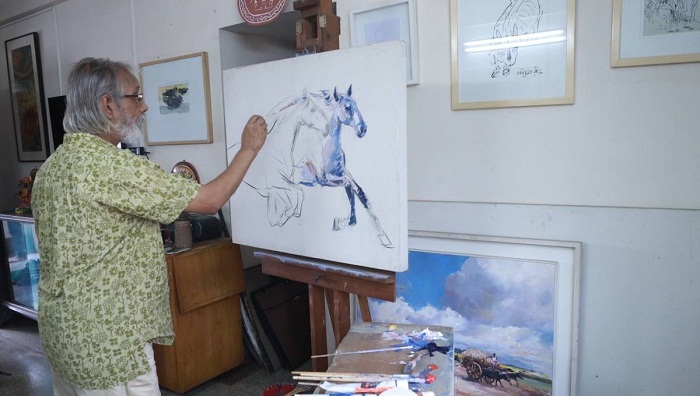 Alakesh Ghosh, recognised as one of the best watercolour artists, considers art as a “kind of meditation” and loves observing much with the inner eye with a desire to remain unstoppable in his works to bring pride for the country and its people.

“People look around with their two eyes. There’s a third eye what I say the inner eye. That’s very important. I think deeply; and see around through my inner eye and imagine,” he told UNB in an interview at his residence here on Tuesday mentioning that he works through a blend of “abstraction and reality”.

The artist, who established himself as one of the most acclaimed painters to emerge from independent Bangladesh, does not think that the road to success is an easy job to navigate but it is possible to achieve something with hard work, drive and passion.

“Hard work, passion and moving ahead on the right direction – these things are crucial. Those who will follow these will surely be successful,” said Ghosh, one of the recipients of “Shilpakala Padak 2018”, who got inspired seeing the portrait painting of his schoolteacher Robi Dutta.

Born on August 15, 1950 in Jamalpur, Ghosh lost his father when he was eight. But his passion for painting did not disappear from his heart for a single moment though the passing of his father had put him in immense troubles.

“I used to follow seniors’ works. Even I used to go to riverbanks or villages with them,” said the artist going down his memory lane.

Sharing his feelings about the recently received award, Ghosh said, “An award is recognition of my work what I’ve done so far in my life. It’ll definitely encourage me to give more to the country and uphold Bangladesh’s image abroad.”

However, the artist, who mastered in working very fast, said he does not work thinking of any award. To justify his intention, he quoted Ramakrishna, “I keep learning until I remain alive. I want to remain unstoppable until my physical conditions remain fit.”

Asked about his book titled "Life and Works: Alakesh Ghosh" published by Cosmos Books, he said this book played a big role in receiving the Shilpakala Padak 2018.

He said Cosmos Books is playing a significant role in promoting the artists of the country, and hoped that others will also come forward recognising their works.

“I firmly believe that Enayetullah Khan will keep promoting artists in a big way,” Ghosh said praising the UNB Editor-in-Chief and Chairman of Cosmos Books for his efforts.

The artist, who is well aware of technological advancement, appreciated the works of the young artists and hoped that other organisations will also come forward to publish books on their works when they will be more experienced. “Such initiative will encourage them.”

Ghosh, who gives much priority to his own rich history and culture, said he has little interest in solo exhibition. His one of the very few solo exhibitions was held in Boston, USA back in 1981.

Though he is considered as a specialist in watercolour, Ghosh keeps working in other forms of work as well.

Talking about his recent works, the artist said he recently visited Aricha Ghat to see the sunset of Srabon.”I keep watching and observing.”

There are things – which in many ways – mysterious and untouchable, he said. “Nothing could be done yet. This helps me think deeply.”

He regrets that many of his paintings – done from 1972 to 1981 – went abroad but did not think of keeping photos of those paintings.

Ghosh’s works have always reflected his seminal attachment to the picturesque beauty of Bangladesh and even he has bestowed his “outsider sensibilities” to depict the urban landscape of the city – Dhaka - he now calls home.

He had taken admission to Art College in 1967 and secured first position in BFA exam. He joined daily Bangla Bichitra in 1973. After working at the daily for 18 years, he quit it and began working as a freelance artist.

He has displayed his works at many exhibitions held both at home and abroad.