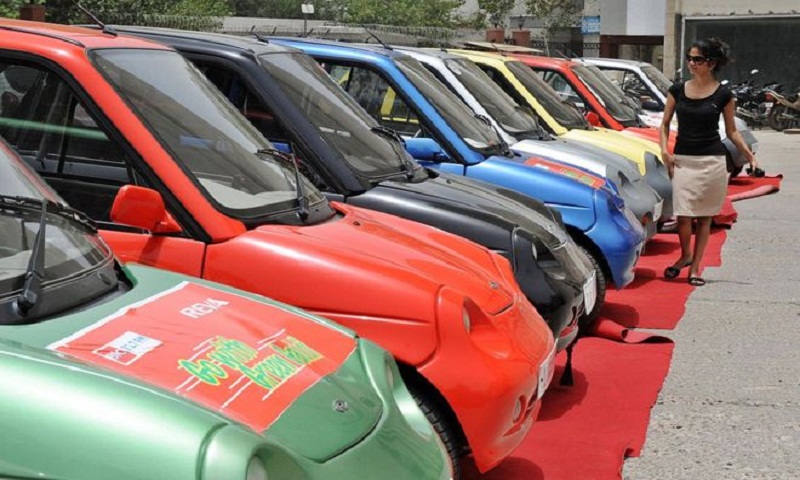 In 2017, Transport Minister Nitin Gadkari shocked the automobile industry (and the world) when he announced that he intended for India to move to 100% electric cars by 2030.

"I am going to do this, whether you like it or not. And I am not going to ask you. I will bulldoze it," he said at an industry conference.

That was an ambitious target given that even the UK and France were hoping to phase out conventional combustion-engine cars only by 2040.

Mr Gadkari and his Bharatiya Janata Party or BJP-led government eventually diluted their plans for electric passenger cars - from 100% the target is now down to 30%.

A pushback by the industry and the fear of job losses were among the reasons for the government to do so.

The government has now decided to focus on the segment below cars: two-wheelers, where sales are much higher, and three-wheelers (largely auto-rickshaws).

In the financial year that ended in March, about 3.4 million passenger cars were sold in the country against 21.2 million two-wheelers, according to data released by Indian automobile manufacturers. The number of three-wheelers sold totalled 0.7 million.

The government seems to have two dominant objectives - to control pollution and take the lead in an emerging industry.

India wants to become a "global hub of manufacturing of electric vehicles", Finance Minister Nirmala Sitharaman said in her budget speech earlier this month. The Economic Survey, a government forecast, released a day before the budget envisaged an Indian city possibly emerging as the "Detroit of electric vehicles" in the future.

But it will be a challenge to create a competitive advantage in electric vehicle manufacturing, or even a market for them, given that India does not have the infrastructure or deep pockets that the world's current leader in electric mobility, China, has.

The American electric carmaker, Tesla, is setting up a manufacturing plant in Shanghai that is expected to be operational by the end of 2019.

India can perhaps learn a few lessons from China. The authorities there spurred sales partly by placing caps on the number of conventional combustion vehicles that can be sold in its most congested and polluted cities. Beijing has also limited the number of electric vehicles that can be sold. Further, car manufacturers now have to ensure that a specified share of their production is of so-called zero emission vehicles.

Another inspiration for India could be Norway, where electric vehicles accounted for half of last year's total car sales. A phase-out of combustion vehicles in the country is planned by 2025.

But there are many encouraging signs in India too.

For one, charging stations are being built at government offices, malls and even within neighbourhoods. Government-owned power companies such as Bharat Heavy Electricals and Energy Efficiency Services plan to begin rolling out charging stations soon. The latter is looking at 10,000 stations over the next two years.

There are already several models of electric two-wheelers, and bike-sharing companies like Bounce are also going electric. Electric buses too can be spotted in many cities, partly fuelled by incentives. India's capital, Delhi, is expected to have 1,000 electric buses running on its roads soon.

Even taxi-hailing apps and home delivery services have taken to ferrying parcels and passengers on electric bikes. After a pilot run with electric cabs, Indian ride-hailing giant Ola is now focussing on electric bikes and three-wheelers.

Instead of charging batteries, which could be a time-consuming task, it intends to opt for a battery swapping model where a fully charged battery would quickly replace the discharged one at swapping stations. Bounce too is experimenting with battery swaps.

The government is also planning to offer incentives for manufacturing electric vehicles and batteries to boost economic growth and encourage local manufacturing under its Make in India initiative.

The falling cost of batteries could boost India's electric mobility plans, and make it that much easier for electric vehicles to be competitive with those running on other fuels. And there is the added bonus of cleaner air.