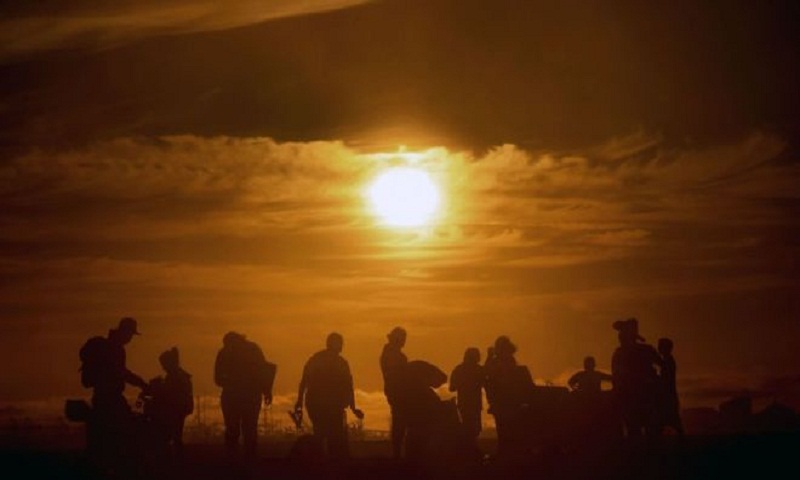 Much of the US is baking this weekend. As American cities continue getting hotter, the people who live in them have begun efforts to heatproof their homes and neighbourhoods in order to stave off the impending rise in global temperatures, writes Lucy Sherriff.

The number of extreme heat days will rocket across the US, according to a new climate change report which predicts hundreds of cities experiencing month-long temperatures above 100F (38C) by 2050.

Roughly 80% of Americans live in cities, equating to around 262 million people. Cities are almost always hotter than the surrounding rural areas, thanks to the urban heat island effect.

These heat islands are caused by numerous factors, such as trapped waste heat, concrete structures and pavements absorbing the sun and tall buildings blocking the wind.

All of these components contribute to air temperatures in cities that can be up to 22F hotter than neighbouring regions with less urban development.

A warming planetary climate means temperatures in heat island areas will continue to rise, with desert states such as Texas, Nevada and Arizona particularly affected.

In 2017, heat killed 172 people in Maricopa County, according to local health officials.

The 9,000 square-mile region - which includes the city of Phoenix and miles of desert - contains 60% of Arizona's population.

The region is one of the most heat-vulnerable areas in the US. To combat this, The Nature Conservancy (TNC) environmentalist group launched a programme to engage communities in tree planting in order to provide cooling shade to vulnerable residents.

The programme aims to bring equality to the city. Affluent neighbourhoods can finance trees themselves, often have air conditioning units, and are less likely to use public transport.

In low-income areas, residents are more likely to work outside, use public transport and generally are more vulnerable to the heat due to their lack of economic resources.

"We are creating green corridors around the city," says Maggie Messerschmidt, urban conservation program manager at the TNC.

TNC is starting by targeting low-income neighbourhoods where urban heat islands are more prevalent due to these areas having less open spaces, more concrete surfaces and less trees.

Earlier this year, Austin saw temperatures of 111F, and the city has been working for a number of years to fight the heat.

One city ordinance in place requires 50% canopy coverage in all car parks by 2030.

Not only that, but 80% of the trees have to be large shade-producing varieties from a designated list of native shade trees, and be planted within 50ft (15m) of parking spaces.

The idea behind providing a specific list of trees is to ensure a diversified and sustainable urban forest, as well as preserving native species.

In Albuquerque, difference in temperature between rural and city areas can reach almost 10F at night.

Climate campaigners have been advocating the use of white-coloured roofs in order to help mitigate the heat, as a traditional dark roof can reach temperatures of up to 150F, and can be up to 50F hotter than white roofs.

Donna Griffin, a member of the Sierra Club's New Mexico chapter, changed her flat black roof to white and says the difference has been "amazing".

There are several buildings in the city already with white roofs, but Griffin is hoping the tactic will be rolled out across the city to include residential homes, particularly those with low income tenants.

Another tactic is implementing "green roofs" - plants and gardens on top of roofs that use vegetation to help trap heat in a process called evapotranspiration.

Although this has been championed by local scientists and urban planners, it has yet to make it into city policy.

"We don't have a citywide policy on using green roofs," says Kelsey Rader, sustainability officer for the city of Albuquerque, in an interview with BBC News.

"But we have adopted adopted a roofing specification for all city government building roof contracts to require reflective roof."

Las Vegas is among the fastest warming cities in the US, warming more than 5.76F degrees since 1970.

A car-centred city, Vegas is implementing alternative transport options to try to break the cycle between heat and air pollution.

Pollutants contribute to temperature rise, but are also made worse by heat which can make air pollutants more toxic and leads to smog.

Almost all of the city's vehicle fleet run on alternative fuels, and electric charging stations have been installed at a number of garages and community centres for public use.

As part of the city's "Master 2050 Plan" - which aims to overhaul planning and zoning - public transportation routes will be extended, renewable energy vehicles prioritised and bike and pedestrian facilities made more accessible.

The concrete jungle of LA gets up to 6F hotter than the surrounding desert, with 2019 already setting records for hottest ever days, according to the US National Oceanic and Atmospheric Administration.

LA Mayor Eric Garcetti aims to cool the city down by 3F by 2035.

One of the city's tactics is using a light-coloured material over one street in each of the 15 council districts, in order to test out the impact.

The material, known as "cool pavement", reflects rather than absorbs the sun and so remains cooler than typical black roads.

However, it is more expensive and doesn't yet meet safety standards for wider, busier streets in the city, hence the demo phase.

One "cool street" in Canoga Park measured 70F shortly after being laid, as opposed to 93F found on a nearby intersection road.

City officials also hope the cool pavements will help cool the insides of nearby buildings and lessen air pollution.