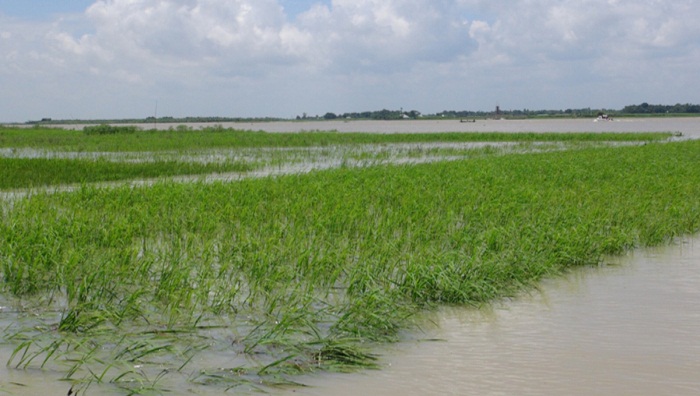 Vast swathes of farmland were submerged in three upazilas of the district as the Padma River continued to swell on Saturday.

The river rose 12cm in the last 24 hours in the morning, said a water reader of the Goalanda point. Padma was flowing 66cm above the danger level at 6am.

Alam Sarkar, a farmer of North Channel area, said the flood had destroyed his livelihood. “My Aush and Aman paddy fields have been inundated before I could harvest,” he lamented.

Thousands of farmers like Alam are now staring at a bleak future.

Faridpur Agriculture Extension Department sources said 2,846 hectares of Aman and 1,098 hectares of Aush, and 124 hectares of vegetable field had gone under water in three unions of the Sadar upazila alone.

Roksana Rahman, Additional Deputy Commissioner, said they will make a list of affected farmers and rehabilitate them after flood. “There’s an instruction from government in this regard,” she said.