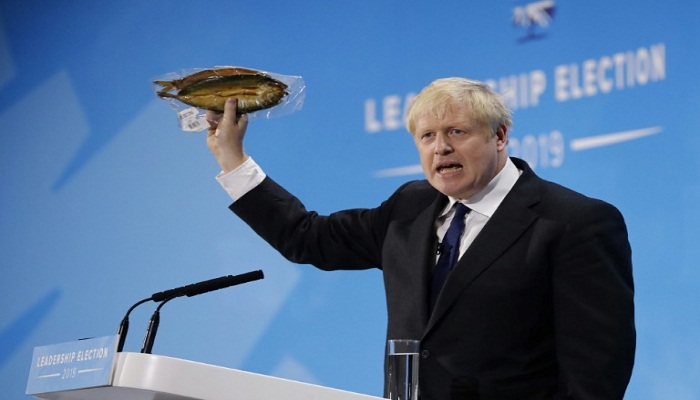 Boris Johnson is expected to become Britain's next prime minister this week, vowing to deliver Brexit on October 31 come what may, in the face of fierce opposition in parliament.

The former London mayor is the runaway favourite to win the governing Conservative Party's leadership contest and replace Prime Minister Theresa May on Wednesday.

The postal ballot of 160,000 grassroots party members is expected to return Johnson, 55, as the new Conservative leader over Foreign Secretary Jeremy Hunt when the result is announced on Tuesday.

Any remaining ballots must be delivered by the Monday 5:00pm (1600 GMT) deadline. Bookmakers give Hunt around a one in 15 chance of victory.

While Johnson spent a relatively trouble-free Saturday, Hunt, his successor in the Foreign Office, was dealing with Iran's seizure of a British-flagged tanker in the Gulf.

The centre-right Conservatives command a razor-thin majority in parliament's lower House of Commons and Johnson's opponents -- both within and outside the party -- are keen to scupper his leadership.

Johnson has vowed to take Britain out of the European Union on October 31, with or without a divorce deal.

Opponents of Brexit, and especially of a no-deal departure, are plotting moves against Johnson.

Some Conservatives have hinted they are prepared to bring down their own government rather than accept leaving the EU without a deal.

He told The Sunday Times newspaper that a no-deal Brexit would trigger national "humiliation".

The broadsheet reported that up to six europhile Conservative MPs were considering defecting to the centrist, pro-EU Liberal Democrats should Johnson win -- leaving him without a Commons majority.

'Right side of history'

The "No to Boris, yes to Europe" protest saw a giant balloon of Johnson -- inspired by the similar blimp of US President Donald Trump -- flying outside parliament.

"I want to be on the right side of history. I think anybody who considers Brexit to be a good solution, really hasn't considered the facts," demonstrator Tamara Bishop told AFP.

Michael Fowler, wearing an EU-flag beret, added: "He is a chancer that will say anything, promise anything and then do whatever suits him. Which might be completely the opposite to what he's promised."

Trump said he spoke to Johnson on Thursday.

"He is going to do a great job," the president said Friday.

Trump renewed his criticism of May, saying she had done "a very poor job" with Brexit and predicted that Johnson would fix the "disaster".

After a month-long campaign, the winner of the contest will be announced on Tuesday as the new Conservative Party leader.

May will answer questions in parliament as prime minister for the final time on Wednesday before heading to Buckingham Palace to tender her resignation to Queen Elizabeth II, the head of state.

The sovereign will then invite the new Conservative leader to form an administration.

May, who took office following the seismic 2016 Brexit referendum, has vowed to be "absolutely" loyal to her successor.

She will remain in parliament as the MP for her Maidenhead constituency in southern England.

"It is important that we have a Conservative government, particularly given the nature of the opposition we have," she told the Daily Express newspaper.

"I will be doing everything I can to make sure that we have a Conservative government," said May.

The 62-year-old added that initially she would "take some time off, have a holiday and adjust to the new world".