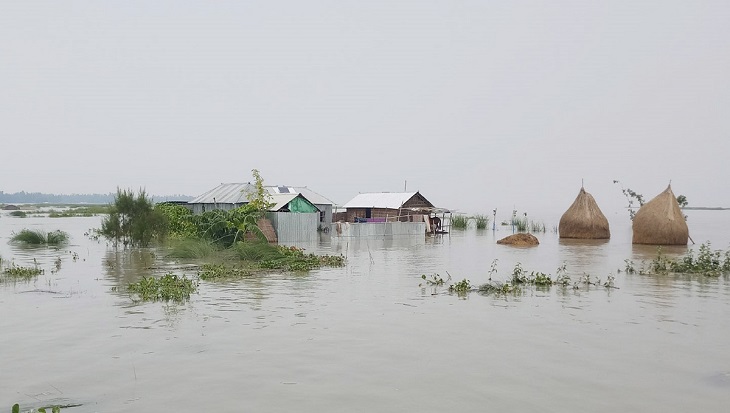 The flood situation worsened in some parts of Bangladesh on Saturday while it showed no sign of improvement in most districts, leaving hundreds of thousands of people stranded.

The lack of food, fodder and drinking water is adding to the miseries of the people of flood-hit areas. Many people are suffering from water-borne diseases. Some people are selling their livestock as they are unable to feed them.

In Kurigram, the overall flood situation remained unchanged as Brahmaputra, Dharla, Dudkumar and other major rivers have been flowing above the danger level for the last 11 days.

In Faridpur, vast swathes of farmland were submerged in three upazilas as the Padma River continued to swell.

The river rose 12cm in the last 24 hours in the morning, said a water reader of the Goalanda point. Padma was flowing 66cm above the danger level at 6am.

Locals spotted her body in front of her house at 7pm, said the deceased's mother Shima Begum.

It was flowing just below the danger level at Naria's Sureshwar point.

Vehicular movement on Naria-Jazira Highway was suspended after it was severely damaged by flood.

In Sirajganj, a flood control embankment was damaged in Kazipur upazila on Friday.

About 25 villages are in fear of being inundated due to the damage.