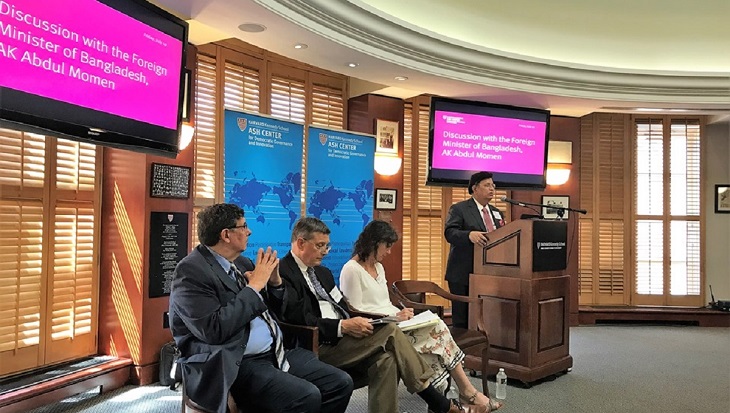 Foreign Minister Dr AK Abdul Momen has urged global educationists, researchers and renowned institutions to play their role, independent of regional and international initiatives, to find a peaceful solution to the Rohingya crisis.

"Myanmar hasn't come forward to resolve the crisis. No step has been taken by Myanmar. They couldn't create the congenial environment in Rakhine to build confidence among Rohingyas (to return). Instead, Myanmar is playing blame game," he said urging the global community to come forward.

The Foreign Minister made the remarks while addressing a seminar titled 'International Rohingya Awareness Conference' held at the Ash Center for Democratic Governance and Innovation at Harvard University's Kennedy School in Cambridge, Massachusetts of the USA on Friday.

Dr Momen said Bangladesh is doing whatever possible for sustainable return of Rohingyas to their place of origin in Myanmar's Rakhine State.

Boston-based economist of Bangladeshi origin Dr Abdullah Shibli, and Professor Emeritus Dr David Dapice of the Ash Center arranged the seminar where Dr Momen was the key discussant, according to Permanent Mission of Bangladesh to the UN.

Bangladesh is currently hosting over 1.1 million Rohingyas and most of them entered the country after August 25, 2017 amid a military crackdowns and "ethnic cleansing" of the persecuted minority.

International Criminal Court (ICC) Prosecutor Dr Fatou Bensouda has recently requested the Court's Judges to authorise an investigation into alleged crimes against humanity committed against the Rohingya people from Myanmar.

The outcome of this request is still pending and is before the Court's judges.