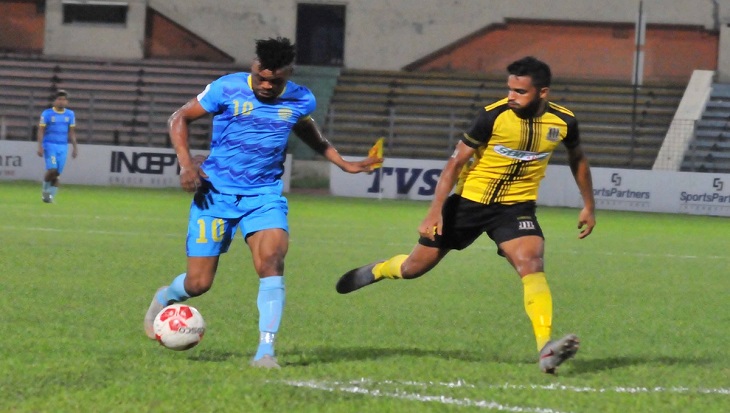 With day's the feat, Nigerian striker Sunday comfortably dominated the top scorer list in the ongoing BPL scoring 19 goals while his teammates Nabib Newaj Ziban is in the 3rd slot scoring 14 goals.

Afghan midfielder Masih Saighani of Abahani Ltd and Rwandan defender Emery Bayisenge of Saif SC got marching order in the 56th minute of the match after receiving red cards.

In the day's other match, star-studded high-fliers Bashundhara Kings tasted their first defeat of the season in BPL, going down 1-0 against Sheikh Russel KC at the flood-lit Sylhet District Stadium, in a game where victory would have ensured them their first BPL title.

But Sheikh Russel KC's Uzbek striker Alisher Azizov had other ideas, scoring the 52nd-minute match-winning goal that destroyed, or at least delayed the party that was in the works for Bashundhara Kings, in anticipation of their maiden league crown beating Russel KC on the day.

Despite today's defeat, Bashundhara Kings maintained their top spot in the league, now with a return of 58 points from 21 matches, while their nearest rivals and defending champions Dhaka Abahani remain 4 points behind despite playing a game more, for their collection of 54 points from 22 matches.

Sheikh Russel KC remain 3rd in the 13-team league securing 45 points from 21 matches, and Saif SC are 4th with their previous collection of 41 points from 21 encounters.