Poverty rate to reduce to 10pc before next polls: Hasan 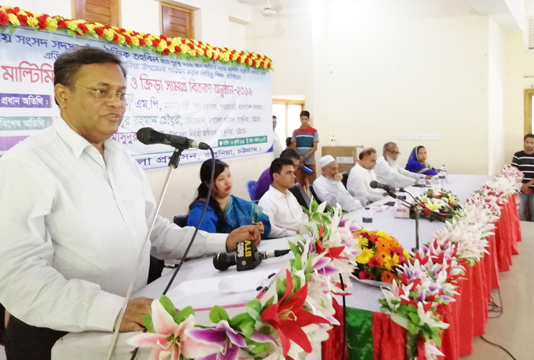 Information Minister Dr Hasan Mahmud on Saturday said the country is now hunger-free and the poverty rate will reduce to 10 percent before the next parliament election.

“Bangabandhu’s daughter Prime Minister Sheikh Hasina declared building a hunger- and poverty-free Bangladesh . . . the country will be poverty-free in phases,” he said, speaking at a function at Rangunia Upazila Parishad auditorium in the district.

The minister was distributing financial assistance among 261 insolvent people from the information minister’s fund. He also distributed multimedia projectors and sports items among different educational institutions.

Dr Hasan, also the publicity and publication secretary of ruling AL, said the poverty rate has reduced to 20 percent from 41 percent during the last 10-year tenure of the Awami League government.

He hoped that the poverty rate will come down to 10 percent before the next general elections. Once a food deficit country, Bangladesh is now a food surplus country and it has decided to export food, he added.

The minister said Prime Minister Sheikh Hasina has taken initiatives to make Bangladesh beggar-free. In this regard, the government has already declared some upazilas as beggar-free, he added.

Dr Hasan said the government has distributed 80 tons of rice among the flood-affected people of Rangunia upazila.

The minister urged the AL leaders and activists to remain alert against those politicians who are only doing the politics of votes.