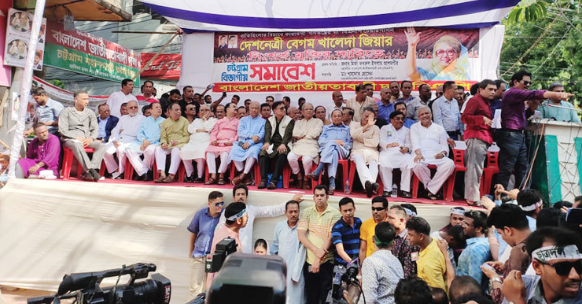 Bangladesh Nationalist Party (BNP) on Saturday arranged a divisional public rally demanding unconditional release of Begum Khaleda Zia, Chairwoman of the party at Kazir Dewri area on Noor Ahmed Sarak in Chattogram city. The program started with a recitation from the holy Quran at 3 pm in the day.

Following the program, the wings of the party were bringing some processions from the other parts of the city. They gathered several thousands of activist at stage area earlier of the scheduled rally.

Chattogram Metropolitan Police (CMP) on Friday imposed 27 conditions when they gave BNP permission to hold a rally in front of its party office at Nasiman Bhaban in the city.

The BNP had sought permission to hold a rally on Saturday at either Laldighi or Kazir Dewri intersection in the city.

CMP’s special branch sent a written copy of the approval to BNP leaders at 6.30pm on Friday. The conditions include not bringing out any procession and refraining from creating disorder.