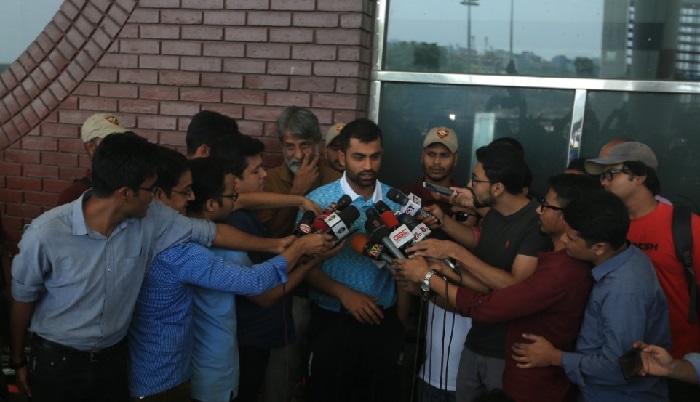 Tamim Iqbal, Bangladesh's skipper, urged the personnel included in his side to grab the opportunity presented to them with both hands in the upcoming three-match ODI series against Sri Lanka after getting an outside chance due to the unexpected turn of events.

With Shakib Al Hasan and Liton Kumar Das missing from the squad having been granted leave by the BCB for personal reasons, the strength of the tourists diminished further after losing skipper Mashrafe Mortaza and pace-bowling all-rounder Saifuddin to injury.

Taijul Islam was picked in place of Shakib, while Anamul Haque replaced Liton initially, but the latest injuries had BCB replace Mashrafe and Saifuddin with Taskin Ahmed and Farhad Reza respectively with neither of the four in the selectors' radar to play ODIs.

"I think the series is very important and who are travelling with the team have a lot to prove because a lot of experienced cricketers are not going due to injury and other personal reasons," Tamim said on Thursday (July 19). "This series will be challenging. Sri Lanka is a very strong team at home but we have done well in the past so there is no reason why we can't do it this time.

"Those who are in the squad... if they grab this opportunity with both hands then it will be better for the team as well as for them too," he added.

Tamim also said that after a below-par outing in the World Cup, he hopes to make a comeback in the upcoming series, brushing off suggestions that the responsibility of leading the side will not add pressure, given his current form.

Tamim managed to score just 235 runs in eight innings in the World Cup at an average of 29.37 and though he was the third-highest run-scorer for Bangladesh after Shakib (606) and wicketkeeper Mushfiqur Rahim (367), it was not enough for the left-handed opener considering his reputation as one of the top batsmen in the country.

"I did not think that way [that leading the side will be an added pressure as I did not score runs in the World Cup and now it will be difficult to lead the side]. I could not play to my expectation [in the World Cup] but there is a new challenge ahead and I am hoping something good will happen, let's see.

"If you think about your failure all the time then you are likely to fail again, so I am thinking what is ahead instead of what had passed away. I am trying to figure out the positives now and what I am saying is that this series is very important and we are hoping to do well as a team," he concluded.