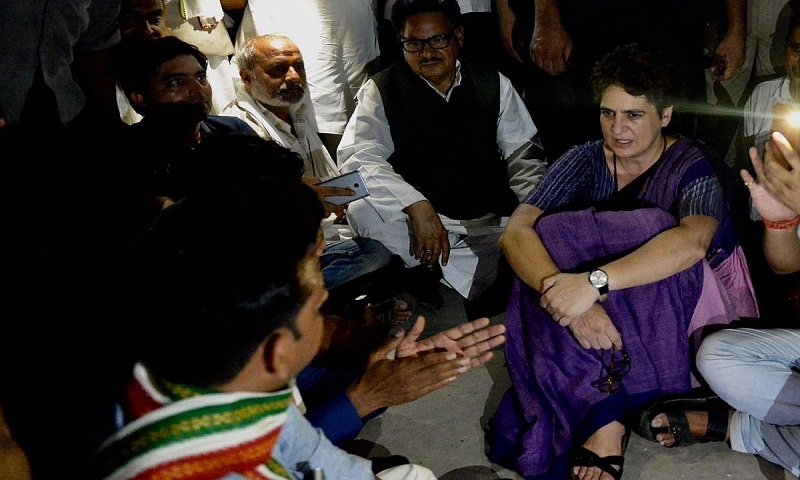 Congress General Secretary Priyanka Gandhi remained in detention on Saturday as she refused to fill the bail bond, 19 hours after she was driven to a guest house after she insisted on proceeding to Sonbhadra district in Uttar Pradesh where 10 people were killed in clashes over a land dispute on Wednesday.

After being stopped at Narayanpur, Gandhi on Friday said that she will continue to sit there peacefully while adding that the administration did allow her to move ahead even when she said she would take only four people along with her.

As she refused to move from the spot where her convoy was stopped, Priyanka Gandhi was taken away in a government vehicle.

Section 144 was imposed in Sonbhadra, which prohibits the assembly of more than four people in the area.

Priyanka was seen in visuals, sitting by the roadside in Mirzapur near Sonbhadra, surrounded by her security and Congress workers.

Late on Friday, some government officials had arrived at the Chunar guest house to ask the Congress leader to return to Delhi. However, she remained adamant.

Late on Friday, some government officials had arrived at the Chunar guest house to ask the Congress leader to return to Delhi. However, she remained adamant.

The officials then left the guest house shortly after midnight.

Earlier on Friday, Priyanka Gandhi refused to fill the bail bond of Rs 50,000.

She has said that the administration informed her that she was detained under section 107/116 of the CrPC.

She also described the killings of the members of the Gond tribe as “massacre”.

A total of 29 people including the village chief have been arrested till now in the case. A case has been registered against 78 people.

At least 10 people, including three women, died and over 24 were injured in a clash between Gond and Gujjar communities over a land dispute in Sonbhadra district on Wednesday.

According to reports, quoted by IANS, the village head and the main accused in the massacre, Yagya Dutt, had brought about 200 men on 32 tractor trolleys to take possession of the disputed land.

After the tribals who were tilling the land, opposed his attempt to take possession of the land, Yagya Dutt’s men fired at them for over half-an-hour, reports The Statesman.