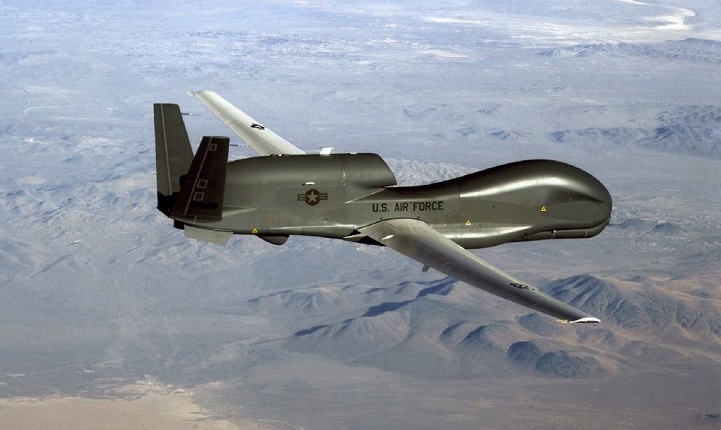 President Donald Trump insisted on Friday that the military had downed an Iranian drone that was threatening a US naval vessel in the strategic Strait of Hormuz, despite denials from Tehran.

Trump, speaking to reporters in the Oval Office, also warned Iran against doing anything "foolish," saying it would pay a heavy price if it did so.

"No doubt about it, no -- we shot it down," Trump said at a White House event honoring the Apollo 11 astronauts.

Trump's National Security Advisor John Bolton added: "There is no question that this was an Iranian drone."

The president was asked if he was concerned about the potential for a clash with Iran.

"And we hope for their sake they don't do anything foolish. If they do, they will pay a price like nobody's ever paid a price," Trump said.

Iran categorically denied US claims that a drone was brought down, saying all its craft were accounted for and jesting that American forces may have destroyed their own aircraft by mistake.

The latest incident in the Strait comes amid soaring tensions after Iran shot down a US drone last month.

On Thursday, Trump said the USS Boxer downed an Iranian drone that threatened the amphibious assault ship as it was entering the Strait.

Iran's armed forces dismissed Trump's assertion as "baseless and delusional" but admitted one of their drones was flying near the US ship.

"There have been no reports of a confrontation with the American USS Boxer," he said, quoted by Tasnim news agency.

On Friday a US official said Washington has "very clear evidence" that it downed the drone but gave no further details.

"If you fly too close to our ships, you're going to get shot down," the official said.

The Revolutionary Guards said they would publish photos taken by one of their drones of the USS Boxer.

Images were transmitted to base "before and even after the time Americans claim" the drone was destroyed, they said in a statement on their Sepahnews website.

The Pentagon said the ship "was in international waters" when the drone approached.

Iran's deputy foreign minister Abbas Araghchi tweeted that the USS Boxer may have shot down a US drone by mistake.

In June, Iran shot down an American surveillance drone it said was flying in its airspace, a claim denied by Washington.

Trump called off retaliatory strikes at the last minute following the incident.

Iran, meanwhile, has rejected US accusations that it was behind a series of recent tanker attacks off the United Arab Emirates coast and the Gulf of Oman.

The tanker troubles further intensified on July 4, when Gibraltar detained an Iranian vessel with the help of British Royal Marines.

Gibraltar's Supreme Court ruled on Friday that the Grace 1 supertanker can be detained for 30 more days.

US officials believe the vessel was destined for Syria to deliver oil, in violation of European Union and US sanctions.

Iran branded the seizure "piracy," and a week later London said Iranian boats menaced a British tanker in the Gulf before they were driven off by a Royal Navy frigate.

The incidents have raised fears of a regional conflict involving the US and its allies in the Gulf, through which nearly a third of the world's oil is transported.

General Hossein Salami, the top commander of Iran's Guards, said they were not seeking to "initiate a war" but would respond to hostilities.

His comments came after the Guards said Thursday they had seized a "foreign tanker" believed to be the Panamanian-flagged vessel Riah and its crew.

But the Guards' deputy chief said the United States would soon realize "it is not in its interest at all to stay in the region."

US forces are under mounting "psychological pressure" in the Gulf, Brigadier-General Ali Fadavi was quoted by Tasnim as saying.

The drone incident comes amid a threatened breakdown of the 2015 Iran nuclear agreement, with Washington steadily ratcheting up economically debilitating sanctions on Tehran a year after unilaterally quitting the deal.

Earlier this month, Tehran purposely surpassed the deal's caps on uranium enrichment, aiming to pressure the remaining parties to make good on their promises to support Iran economically.

Iran has repeatedly threatened to close the Strait of Hormuz if Tehran's oil exports are blocked through sanctions.