Gold Medal awarded to the Navy 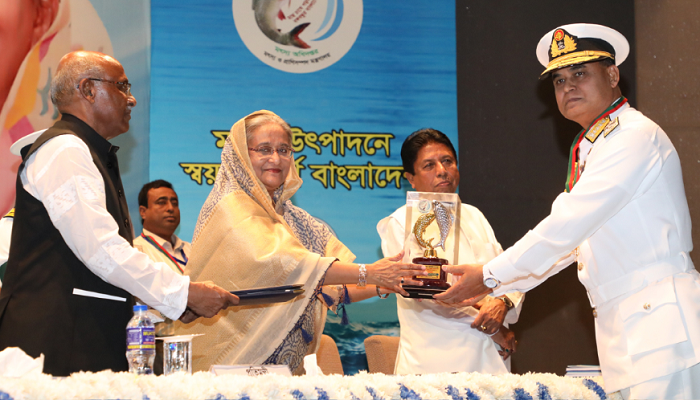 Bangladesh Navy has earned the Gold Medal in the” National Fisheries Award 2019” this year in recognition of their outstanding contribution to the country's fisheries resources and marine fisheries management.

Naval Chief Admiral Aurangzeb Chowdhury formally received the award from Prime Minister Shiekh Hasina at a programme  held in the auditorium of the Krishibid Institution Bangladesh (KIB) in the capital on Thursday .

Meanwhile, Director (Navy Operations) Commodore  Mahmudul  Malek  highlighted the navy's various contributions to the development of country’s fish resources during a briefing held at the Naval headquarters in the city on Thursday.

He also highlighted  various activities of the Navy in the development of the country's fisheries resources and management of marine fisheries.

Average yield of Hilsa production has increased by 5.3 percent in the last ten years thanks to “Operation Jatka” and “Ma Hilsa Reservation Campaign”  by Bangladesh Navy and Coast Guard round the year in the country's inland rivers and coastal areas following  timely and effective direction of the present government, said a media release of Inter Service Public Relation (ISPR).

As a result, Bangladesh’s hilsha catch is currently the largest in the world. In fact over two-thirds of the world's hilsha caught for commercial purposes.

Due to the regular and effective operation of the navy, it has been possible to export the country's hilsa abroad alongside ensuring sufficient supply of the fish in the local market, which is making important contributions to the national economy.

In order to protect national resource ‘Hilsha’, the Bangladesh Navy has been operating 'Operation Jatka' and 'Ma Hilsa Reservation Campaign' since 2001. Five to seven ships of Navy are deployed in the country's inland river and sea coastal areas throughout the year. As a result, it is possible to recover huge quantities of illegal nets and boats as well as fish fries.