Flood condition continues to worsen in northern, some central districts 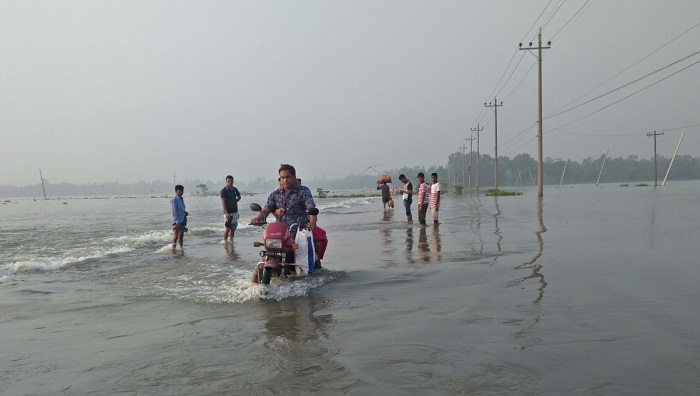 Acute suffering visited upon the people as flood situation continued to deteriorate on Thursday in a number of northern districts starting from Naogaon, Gaibandha, Sherpur, and Kurigram, down to Manikganj, Sirajganj and Faridpur.

In Naogaon, at least ten new villages in Atrai Upazila were flooded here on Thursday to add to another 20 flooded earlier in Koshba and Bishnupur nunions, leaving 50,000 people stranded in the area. Atrai River was flowing 90cm above the danger level.

In Gaibandha, the normal life came to a grinding halt after the district town went under water on Thursday evening. The town was inundated after gushing water breached 20 points of the city embankment, said Roksana Begum, the acting deputy commissioner of the district.

At the confluence of the Jamuna and Brahmaputra rivers, the water was flowing nearly six feet (191cm) above the danger level at Fulchhari point, said Mokhlesur Rahman, executive engineer of the Water Development Board.

The water of the Ghaghot River has risen 91cm above the danger level. More than 700 schools across the district have been shut down.

In rural areas, people are sharing shelters with their precious livestock but the shortage of fodder is turning out to be a headache for them. The administration said it is distributing relief materials but many affected people said they did not receive anything.

In Sherpur, swelling of the Old Brahmaputra River has led to the inundation of new shoal areas, croplands and houses in the district.

Water Development Board said the river rose by three feet within 24 hours and was flowing just below the danger level at Sherpur Ferryghat Point at 6am on Thursday.

Fifty-two educational institutions have been forced to suspend academic activities after they went under water.

Sherpur's road communication with Dhaka and the northern region will be cut off if the situation does not improve.

In Manikganj, the ferry communication on Paturia-Dauladia route was greatly disrupted due to strong current and increasing water level on Padma River.

Each passengers bus has to wait for hours to cross the river as three ferry services stopped operating for technical glitches.

Executive Engineer of Paturia pontoon Swadesh Prasad Mandal said most of the ferries are very old and unsuitable to operate against such strong currents.

“We are trying our best to fix the ferries,” he added.

At least 6 lakh people from 60 unions were living in inhuman conditions due to lack of food, pure drinking water and sanitation

Sources of Deputy Commissioner’s office said 417 educational institutes were damaged by the flood while 15,160 hectares of land went under flood water.

Acting Deputy Commissioner Hafizur Rahman said so far they distributed 500 tonnes of rice, and 2000 packets of dry food among the flood-hit people.

In Faridpur, water of Padma River has been flowing 34 cm above the danger level. Relief and rehabilitation officer Md Saidur Rahman said 45 families of Sadarpur upazila and 14 families from Bhanga upazila were affected by the flood.

A monitoring cell has been set up at Deputy Commissioners’ office in this regard, he said.

They distributed 27 metric tonnes of rice among the flood-hit people, he said.

In Sirajganj, 90,000 people were marooned as water of Jamuna River was flowing 99 cm above the danger level, said Ranjit Kumar of Water Development Board.

Local administration has been distributing relief materials among the flood-affected people, he said.