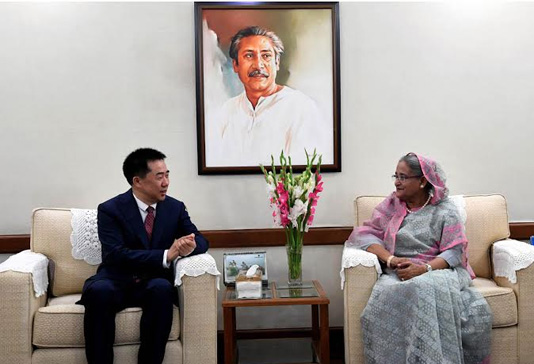 “We want execution of the deal signed between Bangladesh and Myanmar on the repatriation of the Rohingyas,” he said while paying a farewell call on Prime Minister Sheikh Hasina at her official Ganabhaban residence in the capital this afternoon.

In response, the prime minister said if the repatriation of the forcibly displaced Rohingyas starts, even on a small scale, it will be good for all.

The prime minister congratulated the Chinese envoy for successfully completing his tenure in Bangladesh.

“The diverse field of activities has given momentum in raising our bilateral relations to a new height,” she said.

Referring to her recent visit to China, Sheikh Hasina said it was a very good and successful tour.

“The discussion with the Chinese leaders including the president and the prime minister was very fruitful,” she said.

The ambassador thanked the government for its cooperation in discharging his responsibilities during his stay in Bangladesh.

Zhang Zuo highly appreciated Bangladesh’s tremendous development in the last one decade under the leadership of Prime Minister Sheikh Hasina.

“Sonar Bangla (Golden Bangladesh) dreamt by Bangabandhu will come true under the dynamic leadership of the prime minister,” he hoped.

The prime minister informed the envoy that she is going to formally invite the Chinese premier to visit Bangladesh.