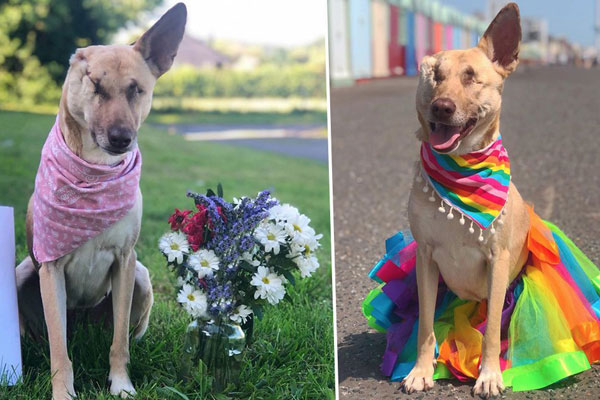 A dog who was shot 17 times and left blind has found a new lease of life after she was rescued from Lebanon and now has 30,000 followers on Instagram.

Five-year-old Maggie was rescued from horrific conditions in Lebanon.

She was found tied to a box with her eyes shot, her ear cut off, her jaw broken and many bullet wounds all over her body.

But six months ago, after an online campaign was started to get her out of the Middle East, she found a new home in Brighton with dog lover Kasey Carlin.

Ms Carlin, 25, heard about Maggie's story through the animal welfare group Wild At Heart Foundation and knew she wanted to take her home.

She said: 'This person in Lebanon posted asking for help and a woman in London saw the post and got help.

'Wild At Heart said they would take her in, even though it's quite hard to get pets out of Lebanon.

'My mum saw Maggie's post and said we had to foster her.

'I got home and saw the picture and agreed.'

Maggie had surgery before leaving Lebanon, which is the first time Ms Carlin and her mother realised the extent of her injuries.

But after having her eyes sewn up to prevent further damage, Maggie was well enough to travel to the UK to meet her new family.

'I was in tears when I met her at the airport,' Ms Carlin said.

'I got in touch with some blind rescue dog charities and asked what to do.