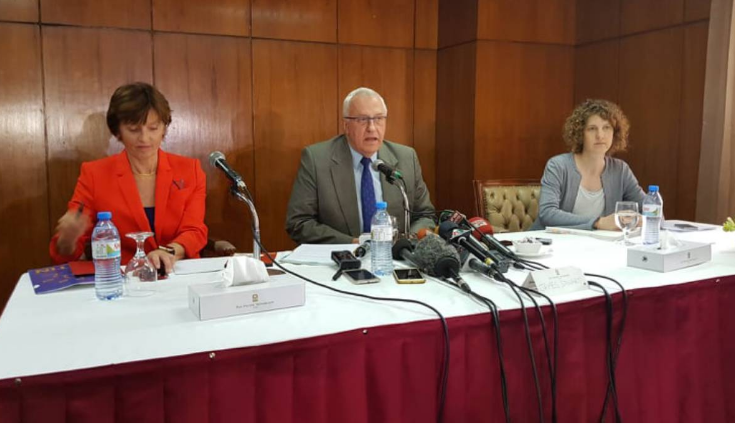 The Office of the Prosecutor of International Criminal Court (ICC) on Thursday laid emphasis on “effective, timely and tangible” cooperation from all stakeholders as an authorization for an investigation into alleged crimes against humanity committed against the Rohingya people is still pending.

“We hope to engage as quickly as possible,” Deputy Prosecutor James Stewart told reporters at a press conference in a city hotel.

He said they will work in strict conformity with the law if they are authorized to do an investigation. “We will do so independently, impartially and objectively; these are principles which guide all of our decisions and actions.”

ICC Prosecutor Dr Fatou Bensouda has recently requested the Court’s Judges to authorise an investigation into alleged crimes against humanity committed against the Rohingya people from Myanmar. The outcome of this request is still pending and is before the Court’s judges.

There is a “reasonable basis to believe” that at least 700,000 Rohingya people were deported from Myanmar to Bangladesh through a range of coercive acts.

Stewart, who is leading a delegation here, said once the judges of the court make a determination on the request of the Prosecutor, the Court according to its normal practice, will inform the public of that outcome.

“Confidentiality during any investigation is essential to protect its integrity, and to protect the security of all involved,” he said.

Asked about signing of MoU with Bangladesh, Stewart said this is a normal practice everywhere and a matter of discussion. “There is no negativity from the part of Bangladesh which is a State party to the ICC.”

The Deputy Prosecutor made it clear that Myanmar is not a State party to the ICC and any potential investigation could only focus on crimes allegedly committed in part on the territory of Bangladesh.

Asked about Myanmar’s engagement, he said they have approached  the government of Myanmar but so far they have not agreed to engage with them (ICC).

The Deputy Prosecutor stressed that while trials are accessible to the public at the ICC, investigations are not.

He also said they do not and cannot participate in national political debates or considerations of relations between States.

“Our mandate is completely separate. As a prosecuting office, we aim to bring justice to victims wherever our jurisdiction is met, by establishing the truth of what happened and holding accountable those individuals most responsible for the crimes,” Stewart said.

He said investigating deportation and other alleged crimes would mean, of course taking a close look at the alleged violence which left the Rohingya people no option but to flee Myanmar.

The delegation from the Office of the Prosecutor arrived here on Tuesday on a weeklong visit to engage with relevant stakeholders and explain the judicial process and the status of the situation.

The delegation is not engaging in any evidence collection in relation to any alleged crimes at this stage.

ICC Prosecutor Fatou Bensouda considers that there is a reasonable basis to proceed with an investigation in relation to the alleged deportation of members of the Rohingya people from Myanmar to Bangladesh and related crimes committed in the context of the 2016 and 2017 waves of violence in Rakhine State, Myanmar.

The ICC delegation members already held meetings with Ministers and senior officials here. They are scheduled to leave for Cox’s Bazar on Friday afternoon.

They will visit Rohingya camps and hold a meeting with government authorities there on Saturday.

They are scheduled to leave Dhaka on Monday.