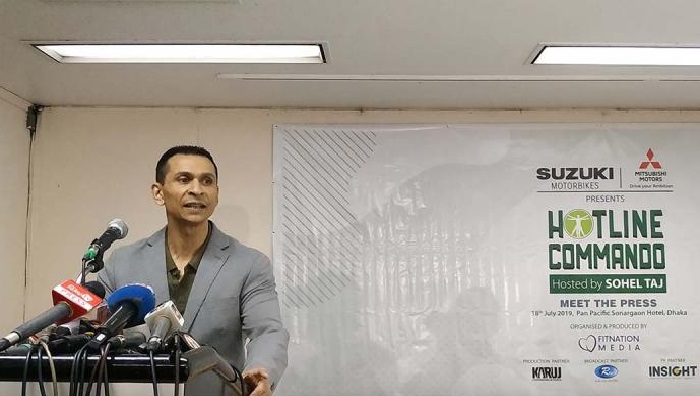 He disclosed the information at a press conference in a city hotel today.

The name of the realty show is ‘Hotline Commando’, that is set to be aired on a private TV channel soon, he informed.

Sohel Taj said, “To fulfill the dream of Bangabandhu Sheikh Mujibur Rahman to build Bangladesh as Sonar Bangla for which 30 lakh martyrs sacrificed their lives, we need ‘Sonar Manush’ (Golden people). I have planned to launch the reality show to create these ‘Sonar Manush’.”

He also informed that he took the decision from his willingness to do something for the people of the country being absent from politics.

Although, Sohel Taj, also the Former state minister for home affairs, reiterated his commitment of remaining beside the ruling party Awami League (AL) during its crisis time.

“I had been thinking of physical and mental health, habits and modes of life style, increasing awareness and good practices of the country people for a long period. Hotline Commando, a lifestyle based reality show has originated from this thinking,” he added.

He also said that he together with the Team Hotline Commando will knock at the doors of people of different walks of life.

“We will inquire of people about their problems related to their modes of life style, health complexities, food habits, accommodation, working environment and so on. The members of Team Hotline Commando will make people conscious and help them practically to choose the easy and effective way of life style,” Bangladesh's first Prime Minister’s son added.

He also informed that the private TV channel RTV will air the reality show ‘Hotline Commando’. The programme will be telecast twice a month from next September on Tuesday. The preparation of telecasting first 12 episodes of the programme has already been made.”

Earlier, Sohel Taj promised to reveal ‘a good news’ for the country people through a video posted on his verified Facebook page on July 14.

Through the press conference, he revealed the ‘surprise’ that he promised for his fans and followers last year releasing a video teaser on his official Facebook page.