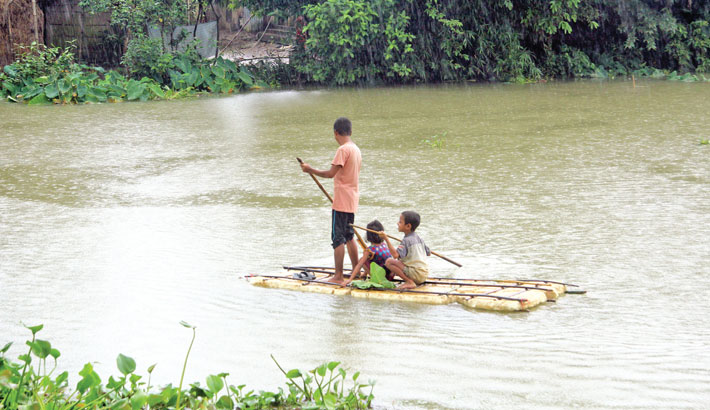 Children take a risky ride on a raft made of banana trees to return home in flood-hit Telikhal village in Companyganj upazila of Sylhet district on Wednesday. Flood situation has deteriorated in the district following torrential rains and onrush of water from the hills. —Mamun Hossain

At least 20 people have died, mostly by drowning, and many of the four million people hit by this year’s monsoon floods are reportedly crying for drinking water and food.

The National Health Crisis Management Centre said at least 25 people have died in the past seven days in nine districts.

Dr. Mohammad Shakhawat Hossain, medical officer of  the Crisis Centre, said “of the total, 18 people were washed away by swirling flood waters, two died of snake bite and five were hit by lightning,” he said.

Three died in Lalmonirhat, seven in Netrokona, two in Nilphamari, one in Chattogram, two in Sunamganj, one in Cox’s Bazar, three in Kurigram, four in Jamalpur and two in Gaibandha, he said.

Water of 14 major rivers is following above danger level at 23 points on Wednesday, according to the Flood Forecasting and Warning Centre (FFWC). The water in all the major rivers showed a rising trend, it said, but the good news was no rains were expected uring the next 48 hours in the upstream.

Flood has spread to 21 districts in the Northern, North-Eastern and South-Eastern regions, leaving about 38,48,330 people affected including marooned and displaced, according to National Disaster Response Coordination Center (NDRCC).

The floods triggered by monsoon rains and run-off from the hills in neighbouring India is wreaking havoc damaging crops and homes with thousands of people living on higher grounds after quitting their submerged homes.

Scores of dwelling houses, schools, colleges, mosques and roads went under the gorge of rivers due to unabated river erosion thereby rendering thousands of people homeless.

They are passing days under open sky in an inhuman condition. A large number of victims have been hit by water-borne diseases including diarrhoea and respiratory tract infection, which are common during floods. Many of them have been hospitalized.

The government’s aid effort was underway along with the Red Crescent Society and some non-governmental organizations, but there is much needed to be done. Government allocated Tk 3.22 crore in cash and 21,550 tonnes of rice (GR) as general relief for the flood-affected people across the country. All the major rivers of the country are in rising trend while the Brahmaputra-Jamuna and Ganges-Padma rivers may continue rising in next 48 hours and the Padma river at Bhagyakul point may cross danger level in next 24 hours, said Md. Arifuzzaman Bhuiyan, executive engineer of Flood Forecasting & Warning Center (FFWC) .

Flood situation in Kurigram, Jamalpur, Gaibandha, Bogra, Sirajganj, Tangail, Manikganj and Faridpur districts may deteriorate in next 24 hours, he said. Flood situation in Netrokona, Sunamganj, Sylhet, Habiganj and Moulvibazar districts may improve in next 24 hours, said the official. According to the information of Bangladesh Meteorological Department and India Meteorological Department, there is no chance of heavy rainfall in the upstream states of Bangladesh in next 48 hours.