Shakib’s absence can be an opportunity for youngsters: Sujon 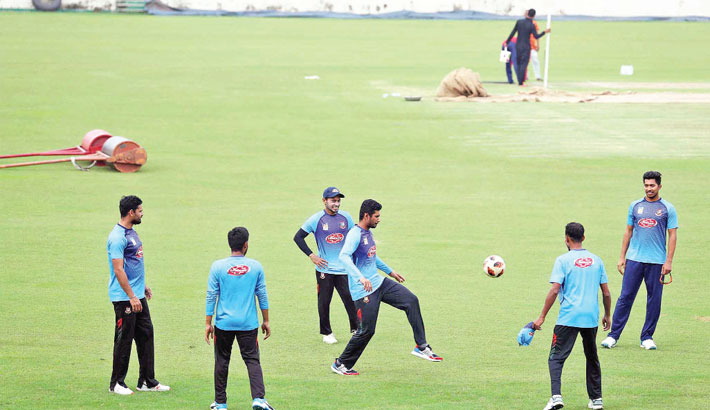 Bangladesh interim Head Coach Khaled Mahmud said on Wednesday that absence of Shakib Al Hasan can be a blessing in disguise as it will allow the youngsters to make solid statements against Sri Lanka in the upcoming Three Match ODI’s series.

Bangladesh Cricket Board (BCB) granted leave to Shakib after his heroics in the just concluded ICC World Cup 2019 as the ace all-rounder asked for a break to perform holy Hajj.

Bangladesh began their preparation for the upcoming Three-Match ODI’s series at Sher-e-Bangla National Stadium on Wednesday.

Four cricketers namely Mohammad Mithun, Sabbir Rahman, Anamul Haque Bijoy and Rubel Hossain were sent to join the Bangladesh A team to play the one-day games against Afghanistan A as part of preparation for the tour of Sri Lanka considering most of them did not play much in the World Cup apart from Saifuddin.

If Shakib doesn’t play, his position needs to be filled by two players every time, because BCB hasn’t found any all-rounder who is of Shakib’s caliber yet.

“If I talk about Taijul, he doesn’t get much chance to play in the ODI format. He was in great form in India. He has played for Bangladesh A. took 14 wickets. Actually it’s a big opportunity for him. Here, many of them can get the opportunity,” added Mahmud.

Bangladesh will play Sri Lanka in the three match ODI series later in this month. July 26 will be the first ODI and then they will play each other in July 28 and 31. All the matches will be played in Colombo.

Mahmud added that he is not clear about his own status as BCB is yet to clear with him as whether they are considering him for the long term proposal.

He is yet to receive any reply for his proposal as Tigers Head Coach on long term basis.

Last week Mahmud said that he is willing to quit as BCB director if he is given the job of Head Coach for a long period of time to avoid conflict of interest as he was alleged earlier of using his power.

Though Mahmud was seen guiding Tigers as they began their preparation for the three-match ODI’s series against Sri Lanka, his role is yet to be defined by the board.

“I haven’t discussed with the board regarding the matter of long term coaching role. Akram bhai told me look after the team as we don’t have any coach at this moment. But I haven’t talked officially with the board,” said Mahmud.

“The main thing is that I have been with the Bangladesh team for a long time and one thing I say all the time that I work for my country. As my country needs me now, so i am doing it. But I will definitely talk with them regarding this,” he said.

“I don’t know in what position I am at now, it may happen that we can also get a good coach. It will be good for us for sure but for now, I will conduct these training sessions of two-three days for sure. Before going we will see clearly what will happen or whatnot. But for now, I am doing what I am told as I stay with this team, if I wouldn’t have been the coach then I would have been the manager,” he said.

Mahmud performed the role of interim coach of Bangladesh in 2017 when Chandika Haturusingha left the job of Bangladesh team suddenly. Bangladesh played in the T20 series against Afghanistan under his guidance.