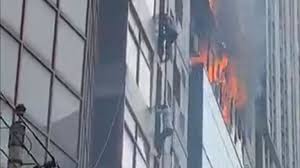 The fire that broke out at a multistoried building at Paltan in the capital has been brought under control.

The fire originated on the 13th floor of the Tropicana Tower, 18-storey building, on Wednesday at 6:00pm, according to fire official.

On information, the fire fighting units of Fire Service rushed to the spot to bring the fire under control.

Abul Hasan, officer-in-charge of Shahbagh police station informed journalists that the fire originated from electric short circuit and it was brought under control instantly.

No casualty and damages took place in the fire incident, he said.