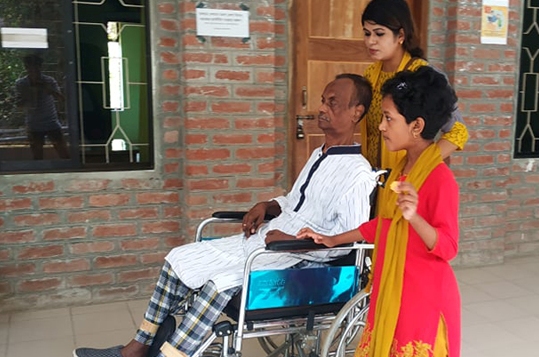 Renowned composer and music director Alauddin Ali returned home on Wednesday after receiving treatment for three months as doctors at Centre for the Rehabilitation of the Paralysed (CRP) in Savar gave him discharge certificate.

On April 8, he was shifted to CRP from Mohakhali’s Universal Medical College Hospital.

“The mental health of the renowned music director has not improved as expected. We think that if he stays with his family, his mental health will improve quickly. So, we have discharged him from here,” she said.

On January 22, Alauddin Ali was taken to the Mohakhali hospital with severe illness. He was suffering from pneumonia, lungs complications and blood infection. The national award winning music director stayed there for almost two months.

Ali debuted as a music director through the film “Shondhikkhon” in 1975. In his 44-year-long career, Ali directed the music of over 300 films.

The veteran music director was born on December 24, 1952 at Banshbari village in Munshiganj district.

Ali's father, Jadob Ali, was a staff artiste at the Dhaka Radio Station. His uncle, Sadek Ali, and cousins—Dhir Ali Miah, Mansur Ali, Yunus Ali, and Momotaz Uddin— were music directors and composers for the radio during the 1960s.