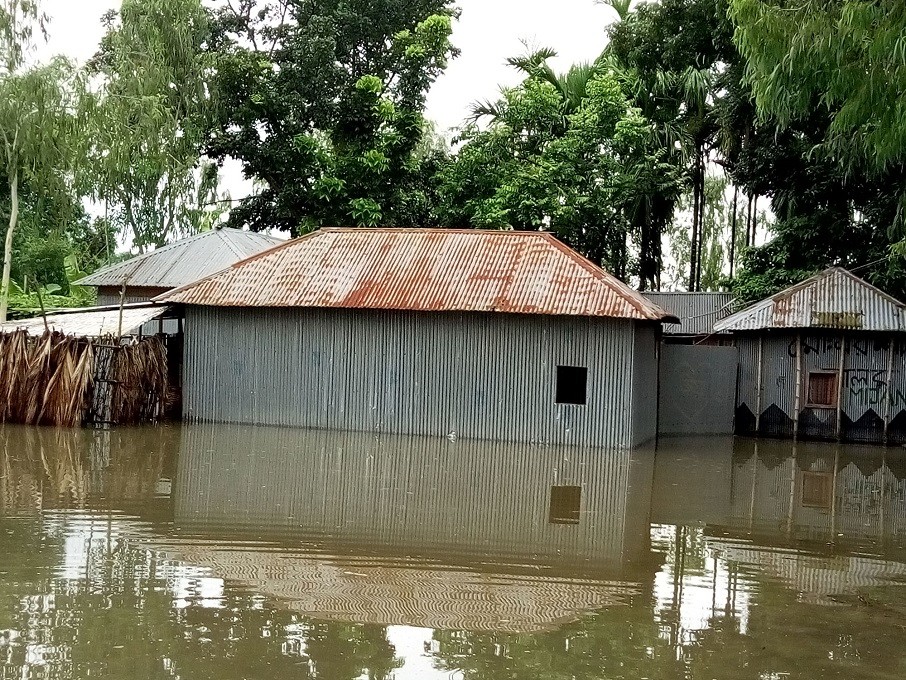 In Kurigram, six people drowned in Ulipur and Roumari upazilas and the Brahmaputra and Dharla Rivers flowed above the danger level, leaving thousands of people stranded.

Besides, Saiful Islam, 25, from Roumari’s Kartimari area drowned after coming in contact with a live wire in the morning. His body was later recovered.

According to the district control room, worsening floods and river erosion affected about 4,00,000 people until Tuesday.

The Brahmmaputra and Dharla rivers were flowing 125cm and 117cm above the danger level respectively at Chilmari and Bridge points.

In Sherpur, about 30,000 people in five upazilas here were stranded as the water level in the rivers continued to rise. An elderly woman drowned at Sarikalinagar of Jhenigati upazila while erosion in six rivers intensified.

The deceased was identified as Ashia Begum of the area.

A 200 feet stretch of an embankment at Rajarkhalpar of Nalitabari upazila and 400 feet in Fakirpara area collapsed, flooding seven villages.

At least 49 educational institutions were closed in Jhenigati, Nalitabari and Sherpur sadar upazila.

In Sirajganj, the flood situation worsened as Jamuna continued to swell due to heavy rains, leaving an estimated 80,000 people stranded in the river islands.

Jamuna was flowing 49cm above the danger level on Tuesday afternoon, water development board officials said. Most parts of the five upazilas near the river have gone under water as new areas continue to be inundated daily.

A man drowned in the flood. He was identified as Kabir Hossain, 48, of Kazipur upazila.

In the affected areas, most of the roads have gone under water, cutting off communications with other parts of the district. Nearly 50,000 people of five upazilas were stranded in the district, according to a local relief official.

In Moulvibazar, about 50,000 people were stranded as rivers continue to swell from incessant rain and onrush of water from upstream.

Monu, Dhalai and Kushiara rivers are flowing 85cm, 24cm and 53cm respectively above the danger level.

Overflow of the Dhalai River waterlogged several villages including Pratapi, Jagannathpur, Jaganshala at Rahimpur union while 300 families were marooned in Khalilpur union.

People of five villages in Bilashpar area of Sreemangal upazila were marooned because of onrush of water from upstream. Flash flood also left hundreds of people in Rajnagar and Kamarchak union marooned.

According to District Administration office, 46,000 people are stranded across Moulavibazar.

In Lalmonirhat, the flood situation showed signs of improvement as the water level of Teesta River receded.

It was flowing 10cm above the danger level at Doani point in the morning, down from 50cm on Monday evening, said Rabiul Islam, Executive Engineer at Dalia Point of Teesta Barrage.

Meanwhile, thousands of families were stranded as the Dharla and Ratnai rivers continued to flow above the danger level.

Communication was disrupted in the Char areas, causing immense sufferings to the locals. The lack of relief materials added to the sufferings.

In Naogaon, thousands of people were stranded as the overflowing Atrai River continued to destroy embankments and inundate localities.

It was flowing 70cm above the danger level on Monday evening.

The situation is severe and locals fear that houses and establishments along the banks could be swallowed by Atrai and Fokirni rivers at any moment.

The water will continue to rise in the next 24 hours. The situation may improve on Thursday, said Sudhangshu Kumar Sarkar, Executive Engineer of Naogaon WDB.

Ibrahim Hossain, local UP member said at least 700 families took shelter on the embankment with their livestock.

Locals were seen voluntarily keeping an eye on 30 risky points of the embankment.

In Bogura, more than 550 villages and 8,000 hectares of cropland were flooded as the water level of Jamuna River continued to rise.

Water Development Board (WDB) said water will continue to rise for another three days. People of 29 unions of Bogura’s Sariyakandi, Sonatola and Dhunot upazilas have already become marooned.

Jute, Aaush paddy, chili and various types of vegetables and Aman seedbed on 8,603 hectares of lands have gone under water. A number of fish enclosures have been flooded and their owners claimed to be have suffered a loss of Tk 2 crore.

The district administration said all preparations have been taken to provide relief materials to about 80,000 people in the three severely affected upazilas.

Twenty-nine medical teams are providing health services in 13 unions of the three upazilas.

The water of Jamuna was flowing 95cm above the danger level at Mothurapara point at noon, local WDB says.

Raihana Islam, ADC of Bogura, said they have taken preparations to protect a 45-kilometre embankment and distributed 2,000 packets of dry food and 142 metric tons of rice.

In Sylhet, over three lakh people have been affected by the flood in 13 upazilas while the district administration formed 140 medical teams.

DC said also that there is nothing to worry and hopefully no new area will be flooded as the water has started to recede in the area.