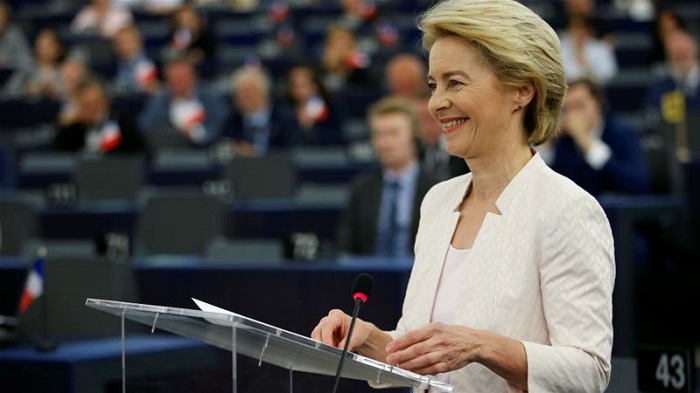 Germany's Ursula von der Leyen has been narrowly elected president of the EU Commission following a secret ballot among MEPs.

She secured the backing of more than half of the members of the European parliament on Tuesday evening.

The Commission drafts EU laws, enforces EU rules and has the power to impose fines on member states if necessary.

"The trust you placed in me is confidence you placed in Europe," von der Leyen, who is the first woman to be elected president of the European Commission, said in a speech immediately after the vote.

"Your confidence in a united and strong Europe, from east to west, from south to north."

"It is a big responsibility and my work starts now," she added. "Let us work together constructively."

A total of 751 MEPs were elected in May, but four were absent for Tuesday's vote.

Born in Brussels, Mrs von der Leyen has seven children and trained as a gynaecologist before entering politics.

She has promised to push for the EU to play a bigger role in social welfare, to tackle poverty, and has stressed that she would stand up for women's rights.

In a speech in the European parliament earlier on Tuesday, Mrs von der Leyen made some other significant pledges:

What is the reaction?

Figures from across the bloc have been quick to congratulate von der Leyen on her election victory.

"About time we get a woman in that important position," Swedish Prime Minister Stefan Lofven said in a tweet. "Time to continue work on the crucial issues: jobs, climate change, migration and security in Europe."

Spanish Prime Minister Pedro Sanchez offered his congratulations and said: "Europe has to move forward. In this we have to work together, addressing the changes that the common project needs."

Belgium's leader - and incoming head of the European Council - Charles Michel said: "I wish to congratulate [von der Leyen]. Let's work together in the interest of all Europeans."