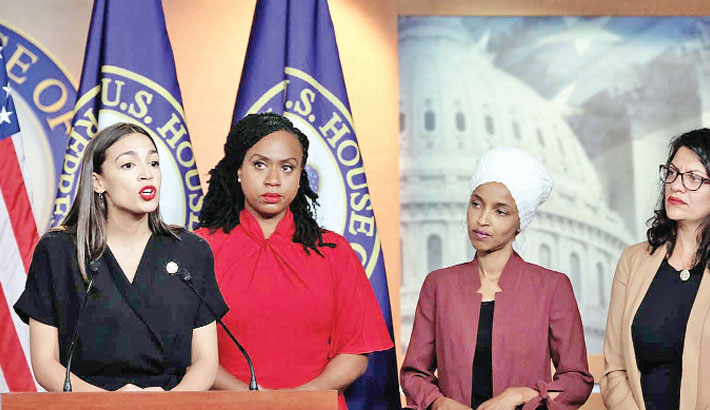 WASHINGTON: Four Democratic congresswomen targeted in a xenophobic tirade by President Donald Trump hit back Monday, saying he was trying to distract attention away from his policies with his “blatantly racist attack”, reports AFP.

The president first attacked the four lawmakers—all but one of whom were born in America—with a series of tweets on Sunday, saying they should “go back” to their countries of origin.

The four—Alexandria Ocasio-Cortez of New York, Rashida Tlaib of Michigan, Ilhan Omar of Minnesota and Ayanna Pressley of Massachusetts—struck back at a news conference Monday and urged people not to “take the bait.”

Trump was simply trying to distract with his “blatantly racist attack” on the four women of color, Omar said. “This is the agenda of white nationalists,” she said.

Pressley also urged the American people “to not take the bait.”

“This is simply a disruption and a distraction from the callous chaotic and corrupt culture of this administration, all the way down,” Pressley said.

The four lawmakers—who have been nicknamed “The Squad” by some media—said attention should instead be focused on healthcare and immigration and, in particular, the treatment of asylum seekers on the southern border.

“Weak minds and leaders challenge loyalty to our country in order to avoid challenging and debating the policy,” said Ocasio-Cortez.

Trump “does not know how to defend his policies, so what he does is attack us personally, and that is what this is all about,” she said. Tlaib said Trump’s tweets and remarks were “a continuation of his racist and xenophobic playbook.”

“We cannot allow these hateful actions by the president to distract us from the critical work to hold this administration accountable to the inhumane conditions at the border that is separating children from their loved ones and caging them up in illegal, horrific conditions,” she said.

Omar and Tlaib repeated calls for Trump to be impeached.

The president also came under fire from some members of his Republican party but remained unrepentant.

“All they do is complain,” Trump told reporters at a White House event featuring products made in America.

“These are people that hate our country,” he said of the four lawmakers.

“If you’re not happy here, you can leave.” Trump also accused the four first-term congresswomen—who are of Hispanic, Arab, Somali and African American origin—of having “love” for US “enemies like Al-Qaeda.”