Panel Discussion at the UN 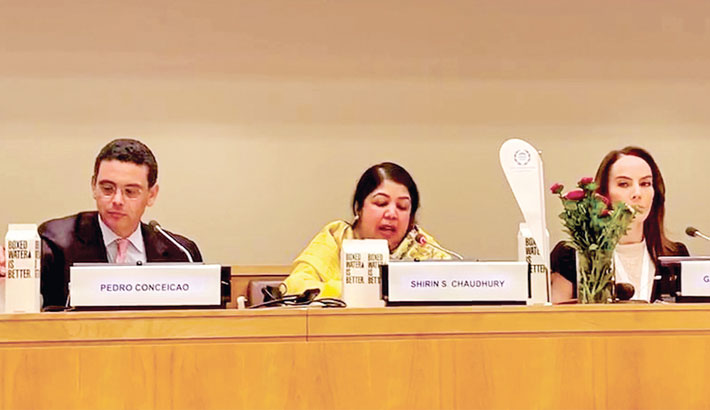 “Woman empowerment is a must in achieving the Planet 50—50 goal,” she said on Monday while addressing a programme styled ‘Gender equality and women’s leadership for a sustainable world’ at United Nations headquarters in New York.

Bangladesh Speaker urged the lawmakers across the world to play their due roles in establishing gender equality.

“Bangladesh under the dynamic leadership of Prime Minister Sheikh Hasina has formulated the National Policy for Women’s Development to reduce gender disparity and empower women,” she said.

She also mentioned about the initiatives taken by the government of Bangladesh, including the safety net programme for the ultra-poor women, allowances for the widow and maternity allowance. “The time demands to achieve the Planet 50-50 goal,” she said.

“Women are also making their presence felt in military, administration, police and judiciary.”  “Bangladeshi women have also been working in United Nations peacekeeping missions with dignity,” she said.

“We must come out from the traditional conception. If we can do so, it will be possible to achieve gender equality,” she noted.

The Speaker also joined another programme styled ‘Growing inequality and distrust in government: Breaking the cycle.”

Masud Bin Momen, Ambassador and Permanent Representative at UN and Zafar Ahmed Khan, senior secretary of Bangladesh Parliament Secretariat, among others, were present.