Morgan has earned the right to decide on captaincy: Strauss 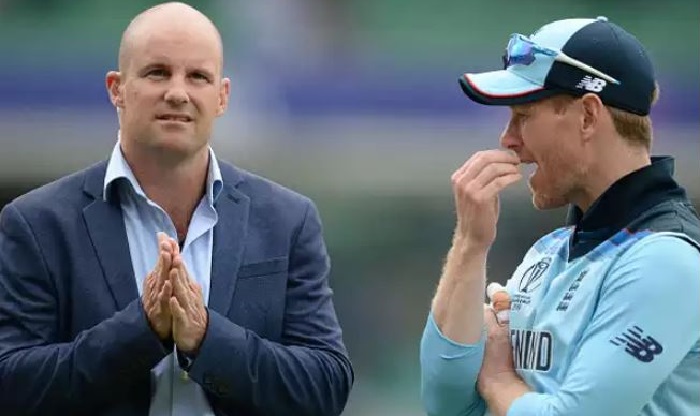 Former English cricketer Andrew Strauss believes Eoin Morgan has "earned the right" to take his time when deciding on whether he should continue as captain after taking England to their first ever men's World Cup.

As the man who kept Morgan in place after the disastrous 2015 World Cup when he joined the ECB as managing director of English cricket later that year, Strauss was pivotal to the shift towards the limited overs formats and sighted 2019 as the chance to right generations of wrongs.

On Sunday at Lord's, he was in the Sky box as a commentator, having left his role after three-and-a-half years to care for his wife, Ruth who was suffering from a rare form of lung cancer. She passed away on December 29, 2018.

Strauss, as a former Middlesex player and England captain, has had a long association with Lord's, approached them with the idea. The plan is to emulate the success of the McGrath Foundation during the Sydney Test and their pink initiative, started by former Australian quick Glenn McGrath in honour of his wife, Jane, who passed away due to breast cancer in 2008.

Speaking at Lord's for the official unveiling of the inaugural event, Strauss was asked about what he felt the next step should be for Morgan in terms of captaincy. Strauss and Morgan's ideas, along with input from head coach Trevor Bayliss, were to build a team for the four-year cycle which has now elapsed.

Though Morgan will be 36 by the time the next World Cup comes around in 2023, the prospect of an upcoming Twenty20 World Cup around in 2020 could keep him around. Especially as it will mean the chance to avenge a heartbreaking loss to West Indies in the final of the 2016 edition.

"He has earned the right to do it," answered Strauss when asked if Morgan should continue. "The question for him is what he wants to achieve here because he has climbed Everest," said Strauss. "That is the question for all the players because we have made mistakes in the past."

"I certainly hope that what he is doing right now, unless he is clear he wants to carry on, is just taking a bit of time to reflect where he is at. To stay on as captain he needs to be driven and motivated to push people on as he has done over the last four years and if he has the bit between his teeth then we've seen just what a fantastic leader he is. The rest of the team will follow him until the last day he is on a cricket field and he needs to decide when that is."

There was a symmetry in Strauss being a commentator for this World Cup as he was for the 2015 edition. England were bundled out in the group stages and Strauss remembers feeling "genuinely angry".

"Not because of anything those guys were doing," he clarifies. "But the same mistakes made in the two previous World Cups that I'd been involved in (2003 and 2007) and prior to my time as well, were being made again. Playing the wrong brand of cricket, picking Test players and hoping they'd put some of the best one day players in the world under pressure. Playing a conservative brand of cricket and trying to justify the unjustifiable. I still remember my quotes from the 2007 World Cup that two threes are as good as a six!

"To me, and this was before I was appointed director of cricket, we just could not do this again. At the next World Cup, what ever happens, we have to say that we prioritised one-day cricket and we went out there and played in a style that genuinely pressurised the opposition."

What comes next is most important for the players, the team and the sport. For the first two, Strauss feels lessons should be learned from how previous sides struggled after reaching similar heights. The 2005 Ashes-winning side struggled to stay together in the same way and were thumped 5-0 in the next series Down Under to give up the urn.

And perhaps most notably, the 2011 team that reached the top of the world and pulled off a historic Ashes heist in Australia feel apart in a dramatic, very public way.

"This is a really good opportunity to learn from what's been before in 2005 from a playing perspective what happened to us in 10/11 in Australia. This isn't the end. It can't be the end. This has to be the start of something bigger.

"That is the lesson from 2005 as well. Nothing ever stays the same. Players change, players get injured, others teams get better. If for one moment you think you have cracked it you are already on the way down again. And that is the challenge for this one day team."

In terms of cricket itself in England, Sunday's incredible 241-241 stalemate followed by a 15-15 stalemate against a New Zealand side who deserve the win as much as the eventual victors. Lord's was rammed, as was Trafalgar Square and cricket clubs across the country, along with a peak TV audience on Channel 4 of 4.5million Britons after Sky Sports agreed to share their coverage with the free-to-air station. Strauss is certain the ECB can build substantially on this surge of interest and thinks The Hundred, which starts next summer, can be a vehicle for it.

"The ECB have been very clear in terms of what their priorities are going forward. They want to grow the game. They want to get new people interesting in cricket and ensure cricket isn't a niche minority sport. This is the perfect launchpad for that. There are a number of other plans that are in action already or will be in action. The whole South Asian engagement stuff, leading towards the Hundred starting next year. What you don't want is for this to be a high watermark and everything drifts back again.

"When you look at it objectively, the Hundred is the best opportunity the game has to really engage the people that tuned in for the first time in that Lord's final and make them more than just casual fans, make them more committed to watching and playing the game themselves."