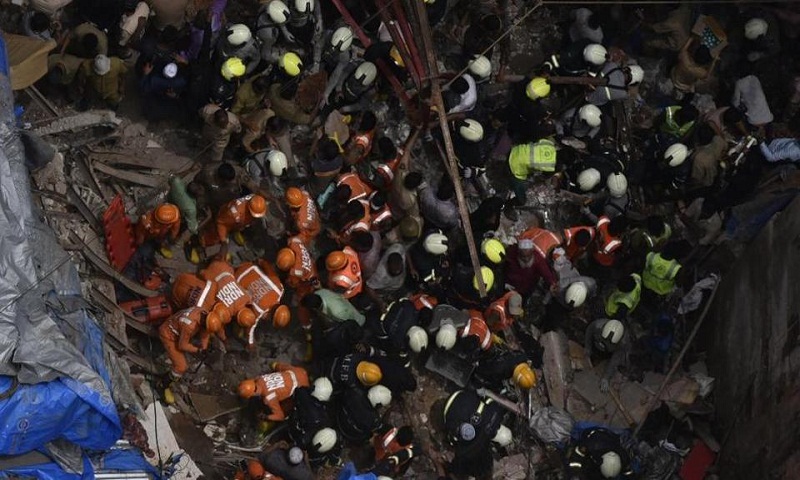 At least two people were killed and 40 feared trapped under the debris of a four-storey building, which came crashing down in south Mumbai’s congested Dongri area of India on Tuesday, officials said.

Local residents reported the incident to the police at 11:40am after they heard a loud crashing sound and saw the Kesarbai building in Tandel street in Abdul Hamid Durga, an area with narrow bylanes, had given way.

“It was a 100-year-old building. It was not in the list of dangerous buildings. A developer was appointed for redevelopment. We will probe if there was any lapse on part of the developer,” chief minister Devendra Fadnavis said.

Officials said rescuers had a tough time manoeuvring a fire tender through the narrow approach to the crash site.

“The area is very congested so approachability is a problem for us. Rescue operations are going on and 40-50 people are feared trapped,” a senior fire brigade official said.

Rescue workers from the fire department, National Disaster Response Force (NDRF), police and civic body staff were on the scene as sniffer dogs looked for survivors amid the ruin.

A video from the spot showed firemen being helped by neighbours in removing debris as they formed a human chain to clear the pieces of concrete and brick with bare hands.

Adjoining buildings, which authorities said were in a dilapidated condition, were vacated after the collapse.

According to Brihanmumbai Municipal Corporation (BMC), the Maharashtra Housing and Area Development Authority (MHADA) has a ground floor and three other storeys.