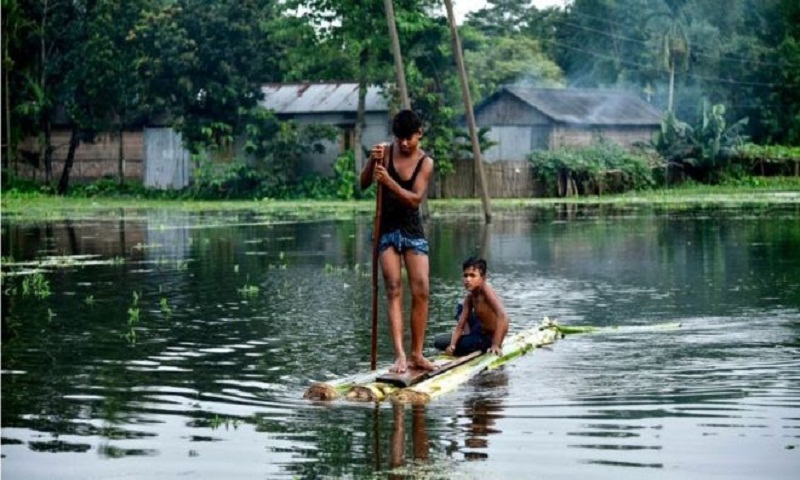 When it comes to water resources, relations between India and Nepal have never been easy.

But in recent years, the relationship has begun to worsen during the annual monsoon season, which lasts from June to September.

Flooding inflames tensions between the neighbours, with angry residents on both sides blaming those across the border for their woes.

This year, floods have been wreaking havoc in the region. Dozens have been killed in Nepal and Bangladesh, and more than three million people have been displaced in north and north-eastern India.

More than 6,000 rivers and rivulets flow down to northern India from Nepal and they contribute around 70% of the flow of the Ganges river during the dry season.

So, when these rivers overflow, floodwaters devastate the plains of Nepal and India.

In the last few years, there has been palpable anger on the Nepali side of the border in particular.

Nepal blames dyke-like structures along the border that it says block the floodwaters from flowing south into India. During an investigation in eastern Nepal two years ago, the BBC saw structures on the Indian side that appeared to do just this.

This was at a location where locals from both sides of the border had clashed in 2016 after Nepal objected to the embankment.

Nepali officials say there are around 10 such structures, which inundate thousands of hectares of land in Nepal.

Indian officials say they are roads but experts in Nepal say they are embankments that protect Indian border villages from the floods.

"After much panic, two gates beneath the Indian embankment were opened and it did help us," Krishna Dhakal, the superintendent of the armed police force, told the BBC.

Indian officials did not reply to requests for comment.

The two countries have been holding meetings on the issue for years now but nothing much has changed. A meeting in May between Nepali and Indian water management officials acknowledged the "ongoing constriction of roads and other structures" along the border but said this should only be discussed through "diplomatic channels".

Nepali negotiators and diplomats have faced criticism in their country for not being able to raise the issue effectively with their Indian counterparts.

But that's not to say Indians aren't suffering from flooding too. About 1.9m people have been forced out of their homes in the north-eastern state of Bihar alone, the state government said on Monday.

Bihar is hit the hardest when major rivers such as the Kosi and Gandaki - which are tributaries of the Ganges - flood, and Nepal is often blamed for opening floodgates and jeopardising settlements downstream.

But it's actually the Indian government that operates the barrages on both the rivers even though they are located in Nepal.

This is in accordance with the Kosi and Gandak treaties the two countries signed in 1954 and 1959 respectively.

The barrages were built by India mainly for flood control, irrigation and hydropower generation. But they have been quite controversial in Nepal because they are seen as not benefiting the local population.

The Indian government, on the contrary, points to them as a good example of transboundary water cooperation and management.

The Kosi barrage alone has 56 floodgates. Whenever monsoon-induced floods on the river reach "danger" levels, India is criticised for not opening all the gates, which locals say threatens settlements in Nepal.

The Kosi, long known as the "sorrow of Bihar", has flooded several times in the past and caused devastation. When it burst through its banks in 2008, thousands died and nearly three million people in Nepal and India were affected.

Since the barrage is now nearly 70 years old and there are fears that big floods could damage it, India has been planning to build a dam to the north of the barrage. This too would be located in Nepal.

Many of Nepal's rivers flow though the Chure mountain range that has a fragile ecology and is already severely threatened.

These hills once checked the flow of the rivers and minimised the damage they could cause, both in Nepal and across the border in India. But deforestation and mining have destabilised the hills.

A recent construction boom has led to rampant mining of boulders, pebbles and sand from the river beds in the region. The infrastructure industry in the Indian states of Uttar Pradesh and Bihar is further encouraging the destruction of the area's natural resources.

And with all of these natural checks gone, monsoon floods are no longer under control, say officials.

A high-profile conservation campaign was launched a few years ago but it fizzled out and the plundering of natural resources has now reached alarming levels.

The region's ecology is crucial not just for the future of Nepal's plains, known as the country's breadbasket, but also for Uttar Pradesh and Bihar. Nepal faces criticism from India for failing to control deforestation and mining.

Now, as climate change makes the monsoon itself erratic, experts fear that the issues between the two neighbours could become far more complicated.