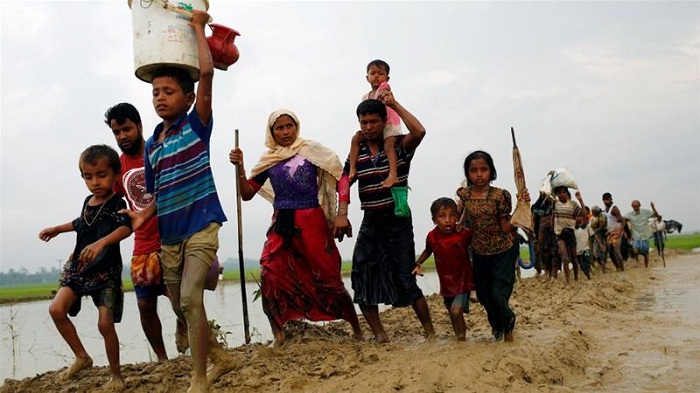 A delegation of the International Criminal Court (ICC), led by its Deputy Prosecutor James Kirkpatrick Stewart, is scheduled to arrive in Dhaka on

Tuesday to talk to senior government officials and representatives of international organisations over the Rohingya issue.

Apart from holding meetings with the senior officials of the Law and Home ministries, the ICC delegation members will also visit Rohingya camps to see the situation on the ground, officials said.

The Prosecutor of the International Criminal Court (ICC) has already requested its judges to authorise an investigation into alleged crimes like deportation, other inhumane acts and persecution committed against Rohingyas.

As Myanmar is not a State Party to the Rome Statute, but Bangladesh is, it is important to keep in mind that the authorisation to investigate, if granted by judges, would not extend to all crimes potentially committed in Myanmar, but will focus on crimes allegedly committed in part on the territory of Bangladesh, according to the ICC.

Investigating deportation will, however, mean taking a close look at the alleged violence that left the Rohingya no genuine choice but to flee Myanmar.

The request seeks authorisation from the court's judges to open an investigation into alleged crimes within the jurisdiction of the court in which at least one element occurred in the territory of Bangladesh and within the context of two recent waves of violence in the Rakhine state of Myanmar, as well as any other crimes which are sufficiently linked to these events.

The requested authorisation to investigate the situation covers the period since the October 9, 2016.

The prosecutor's request follows her office's thorough preliminary examination which, in its assessment, concluded that the legal conditions required under the Rome Statute to open an investigation have been met.

On April 9 last year, the prosecutor filed a request with the court's judges for a legal ruling on the question of jurisdiction over the alleged deportation of the Rohingya people from Myanmar to Bangladesh.

The second phase of the preliminary examination of this situation started last September, following the judges' ruling in response to that request, which confirmed that the court may assert jurisdiction pursuant to article 12(2)(a) of the Statute, "if at least one element of a crime within the jurisdiction of the court or part of such a crime is committed on the territory of a state party to the Statute."

Following the office's preliminary examination process, the prosecutor has determined that there is a reasonable basis to believe that at least 700,000 Rohingyas were deported from Myanmar to Bangladesh through a range of coercive acts and that great suffering or serious injuries have been inflicted on the Rohingyas through violating their right to return to their state of origin.

Although the coercive acts forcing the Rohingya population to flee took place on the territory of Myanmar, the victims crossed the border-an essential element for the crime of deportation-by entering into the territory of Bangladesh, according to a media statement of the ICC.

Other inhumane acts under article 7(1)(k) of the statute, namely, the infliction of great suffering or serious injury by means of intentional and severe violations of the customary international law right of displaced persons to return safely and humanely to the State of origin with which they have a sufficiently close connection.

The office of the prosecutor has carefully assessed available information on relevant national proceedings.

In light of the gravity of the acts committed - the details of which are outlined in the request - and the absence of relevant national investigations or prosecutions in Myanmar or in relevant third states, against those who appear to be most responsible for the most serious crimes within this situation.

The prosecutor considers that the potential cases that her office has identified as likely to be the focus of an investigation in this situation, would be admissible pursuant to articles 53(1)(b) and 17(1) (a) and (b) of the statute.

The prosecutor has determined that there are no substantial reasons to believe that the opening of an investigation would not serve the interests of justice, taking into account the gravity of the crimes and the interests of victims.

As per the applicable rules, the prosecutor also notified victims or their legal representatives, of her intention to request authorization to initiate an investigation in the situation in Bangladesh/Myanmar informing them that they have until October 28 to submit representations to the judges of Pre-Trial Chamber III on her request.

The office of the prosecutor of the ICC conducts independent and impartial preliminary examinations, investigations and prosecutions of the crime of genocide, crimes against humanity, war crimes and the crime of aggression.