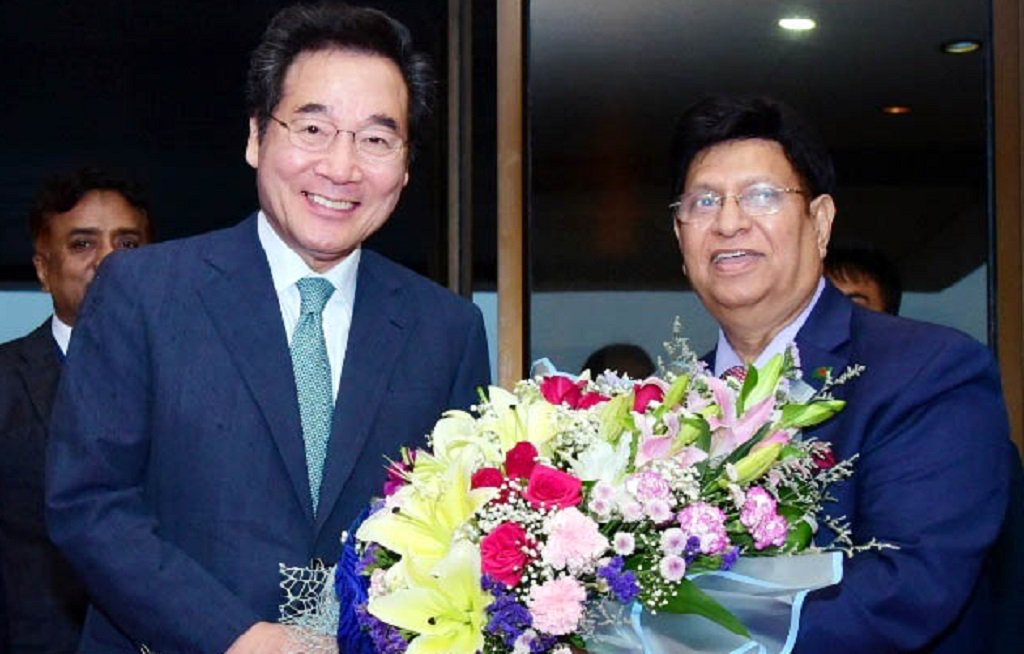 Lee left Hazrat Shahjalal International Airport for Tajikistan by a special flight at 11:30 am while Foreign Minister Dr A K Abdul Momen saw him off at the airport.

Prior to his departure, the Korean premier received a farewell static guard of honor presented by a contingent of Bangladesh military at the VVIP terminal of the airport.

Earlier in the morning, Lee paid rich tributes to Father of the Nation Bangabandhu Sheikh Mujibur Rahman by placing a wreath at the portrait of Bangabandhu in front of Bangabandhu Memorial Museum on Road-32 at Dhanmondi in the city.

The Korean premier was briefed about the history of the Father of the Nation and given the tour of the museum by Saima, the granddaughter of Bangabandhu.

On Sunday, Lee held a bilateral meeting with his Bangladesh counterpart Prime Minister Sheikh Hasina at Prime Minister’s office when Dhaka urged Seoul to consider allowing duty free market access of all Bangladeshi exports to Korea without any exception.

During the talk, Prime Minister Sheikh Hasina also urged her visiting South Korean counterpart to engage with Myanmar for an early peaceful solution to the Rohingya crisis saying it posed a threat to regional stability and peace.

The Korean Premier assured that South Korea will do all possible things to resolve the Rohingya crisis.

Lee also said his government would consider the Bangladesh proposal for duty-and-quota- free access of its goods to South Korea.

The South Korean prime minister termed Bangladesh as a “potential country” with a huge investment opportunity while Bangladesh premier said Korea may invest in ‘Bangabandhu Sheikh Mujib Shilpa Nagar’ which is the most potential investment hub for the investors under G2G and PPP model. After the talk between the two premiers, Bangladesh and South Korea signed three instruments for bolstering cooperation in the fields of trade and investment, diplomacy and culture between the two countries.

Lee also called on President Abdul Hamid at Bangabhaban on Sunday where he said his country would always stay beside Bangladesh for materializing the Vision-2041 to help it turn into a developed country.

The South Korean Premier also addressed Korea-Bangladesh Business Forum, jointly organised by Korea International Trade Association (KITA) and Federation of Bangladesh Chamber of Commerce and Industry (FBCCI) in the city. Lee said to both of the countries businessmen that South Korea is keen to cooperate Bangladesh in various fields especially energy, infrastructure, ICT and hi-tech sectors to further strengthen trade ties between the two nations.

During his visit, the Korean PM also paid homage to the liberation war martyrs of Bangladesh by placing a wreath at the National Memorial at Savar.

He also visited a Korean factory in Savar EPZ and National Institute of Advanced Nursing Education and Research at Mugda in the city.

Lee arrived here on Saturday as first destination of his four-nation tour from July 13 to 21. His next three destinations are Tajikistan, Kyrgyzstan and Qatar.