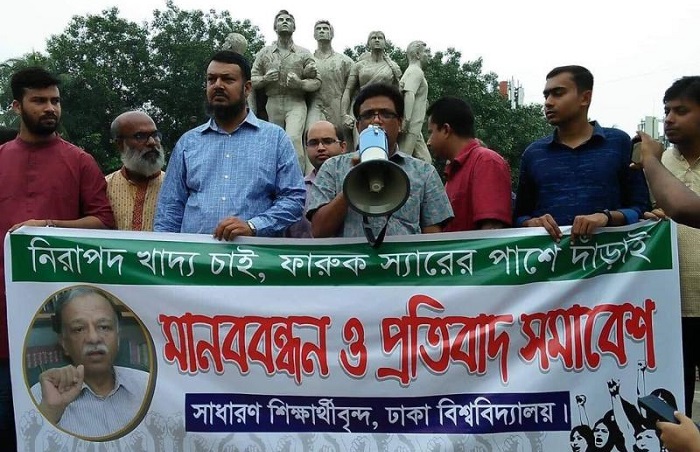 A group of teachers and students from Dhaka University on Sunday expressed their solidarity with Professor ABM Faroque for conducting research on pasteurised milk products of the country.

They also demanded the removal of Additional secretary at the Fisheries and Livestock Ministry Kazi Wasi Uddin for threatening to take legal action against Prof Faroque for publishing the study report.

They staged a rally and formed a human chain at the foot of Raju Memorial Sculpture on the campus under the banner of “We Want Safe Food, Let’s Stand By Faroque Sir” on this afternoon.

Pharmacy Faculty Dean Dr SM Abdur Rahman along with his co-workers was present in the human chain programme and protested the threatening of the additional secretary.

He said, “Prof Faroque has conducted the research to increase mass-consciousness and disclosed the study report at a press conference as he considered the unsafe foods a threat to public health. But one of our additional secretaries threatened to take legal action against the DU researchers for disclosing the report. We don’t consider his warning silly and usual.”

The dean also said that he thinks the additional secretary should be removed from his duty and punished as he delivered a speech attacking the researches instead of introducing more researches for the greatest interest of common people.

Earlier, a latest study, conducted by Dhaka University researchers and published on Tuesday, has found the presence of antibiotics, detergent and other forms of hazardous bacterial organisms in the pasteurised milk products of five popular brands currently sold in the capital’s kitchen markets.

Dhaka University’s Pharmacy Faculty and Biomedical Research Centre jointly conducted the study and Professor ABM Faroque of the Pharmacy Department unveiled the study report at a press conference on July 2.

On July 9, Additional secretary at the Fisheries and Livestock Ministry Kazi Wasi Uddin threatened legal action against the DU researchers if they fail to produce their study report published in an international peer-reviewed journal.

Later, Researchers again claimed to have found traces of antibiotics in 10 samples of pasteurised and unpasteurised milk manufactured by several companies of the country through a press release.

Their second round of study detected four antibiotics used for humans -- Oxytetracycline, Enrofloxacin, Ciprofloxacin and Levofloxacin -- in all of the 10 samples of pasteurised and non-pasteurised milk they tested.