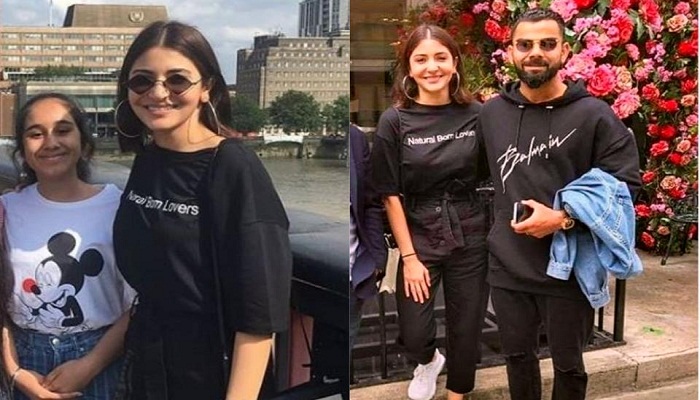 Actor Anushka Sharma and her cricketer husband Virat Kohli are spending some quality time together in the UK after Team India failed to qualify for the finals in the ongoing ICC World Cup 2019. The two were spotted twinning in black during one of their lunch outings.

The couple was spotted by fans as they went sightseeing around the city. Anushka wore a black t-shirt with ‘Natural Born Lovers’ printed on it and paired it with matching trousers whereas Virat was in a hoodie and denims in black. Both wore exactly similar white shoes to complete their look. Virat can be seen holding Anushka’s denim jacket as she smiles for the camera in a picture.

While there were many brooding over India’s loss to New Zealand, a fan reacted to one of the pictures, “The Captains smile is coming back in bits.”

Earlier on Saturday, several pictures of the couple spotted out and about London were shared online. Post the semi-final, Anushka and Virat were spotted in Manchester. While Virat looked disappointed, Anushka was seen walking quietly beside him in a few pics.

Anushka has been on a break from films after starring in three films last year. She was last seen as a wheelchair-ridden NASA scientist in Zero, opposite Shah Rukh Khan, who played a dwarf. The film also starred Katrina Kaif and failed to perform at the box office. Anushka was also seen in different looks in Sui Dhaaga and Pari, which got an average response at the box office.

Talking about why she chose to go slow this year, Anushka told Hindustan Times in an interview, “In the past three years, I have been working in a fashion which was very hectic, and have done roles which were extremely demanding. In one calendar year to do a film like Pari, Sui Dhaaga and Zero, it’s not easy and takes a toll on you. All are different, and required a lot of prep. You feel you want to sit back and take a call. I think I have reached that position and security as an actor in my career, where I don’t need to do things or sign films just because I have to fill up time.”