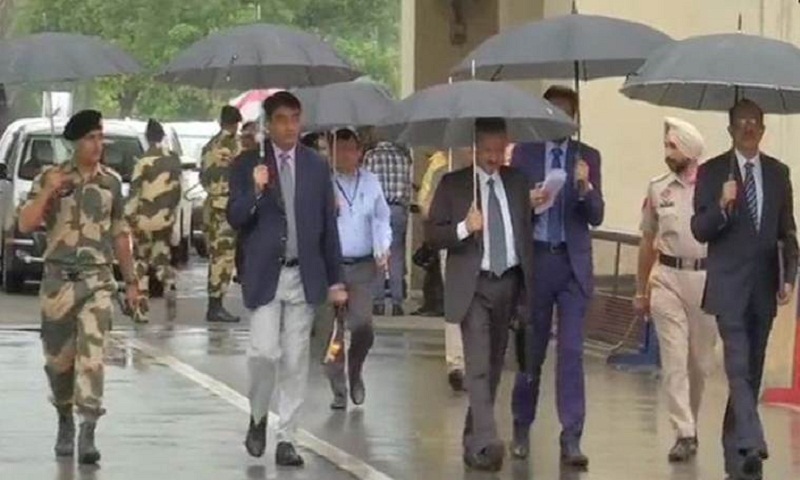 A delegation of Indian and Pakistani officials on Sunday arrived at the Attari-Wagah border to discuss the Kartarpur corridor and the draft agreement on the modalities for movement of pilgrims, and resolve outstanding technical issues.

The meeting comes amid differences between the two sides over a range of issues, including a bridge at Zero Line on the Indo-Pak border at Dera Baba Nanak.

So far, three rounds of technical-level discussions have been held to try and finalise the alignment, crossing point and infrastructure along the corridor.

The two countries have had run-ins in the past over the corridor, including over pro-Khalistani faces in a committee set up by Pakistan and over Pakistan’s refusal to allow at least 5,000 visitors a day from India.

The issue was discussed at a technical meeting between officials of the two countries at the Attari-Wagah border on May 27.

Sources said construction work at the site for the Passenger Terminal Complex at Dera Baba Nanak in Punjab is in full swing.

The construction work is being carried out by M/S Shapoorji & Pallonji Pvt Ltd under the supervision of the Land Ports Authority of India.

The terminal is being built on nearly 15 acres to cater to approximately 5,000 passengers per day. It will have comprehensive facilities to ensure smooth movement of pilgrims, including facilities for immigration and customs clearance. The complex will also have CCTV surveillance and adequate parking space for 10 buses, 250 cars, and 250 two-wheelers. More than Rs 500 crore is estimated to be spent for development of this complex.