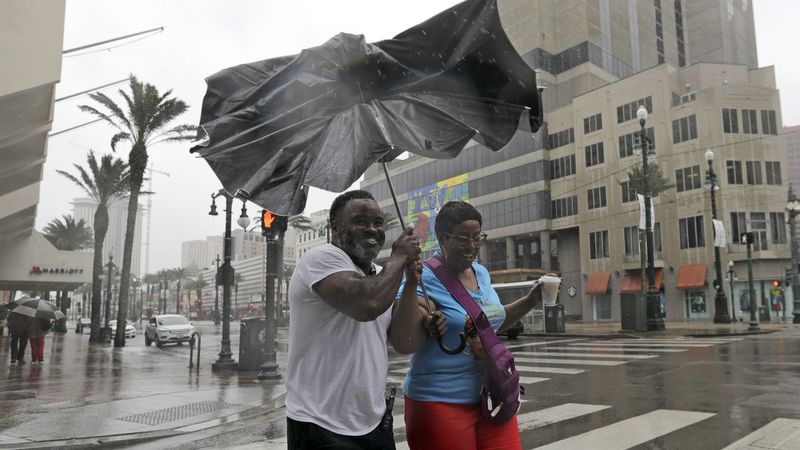 Major storm Barry made landfall on the Louisiana coast on Saturday, slamming the region with heavy rains and ferocious winds as millions of Americans braced for the serious flooding expected to follow.

After briefly becoming the first hurricane of the Atlantic season, Barry was quickly downgraded to a tropical storm as it moved inland -- but it nevertheless packed a serious punch.

The airport in the state's biggest city New Orleans was shut for the day, thousands of people were evacuated, flood gates were slammed shut and emergency personnel, National Guardsmen and volunteers were in position.

Earlier fears that the levee system in the Big Easy could be compromised had eased, with the Army Corps of Engineers voicing confidence that it would hold, but the city's mayor LaToya Cantrell urged residents not to be complacent.

"We are not in any way out of the woods," she told reporters, adding that flash flooding could still occur into Sunday.

At 1:00 pm (1800 GMT), the storm was packing sustained winds of 70 miles (115 kilometers) per hour, the National Hurricane Center (NHC) said in its latest storm advisory.

The eye of the storm made landfall at Intracoastal City, to the west of New Orleans, and was moving at a slow pace of six miles an hour.

But it had already punished the Gulf Coast, unleashing downpours on Louisiana, Mississippi and Alabama.

In Morgan City, Louisiana, the streets were deserted. The Atchafalaya River had flooded its banks, and trees were already blown over in residential areas. Sand bags lined some storefronts and power lines were down.

Governor John Bel Edwards urged vigilance from residents across the state, tens of thousands of whom had lost power.

"I want to caution everybody -- this is just the beginning," Edwards told a press conference.

NHC Director Ken Graham warned of the potential for inland flooding, saying: "It's not just a coastal event."

For many, the large storm swirling in the Gulf of Mexico and the potential for large-scale flooding in coastal and river areas has brought with it unpleasant memories of 2005's deadly Hurricane Katrina.

Thousands have packed up and left their homes as floodwaters hit low-lying areas like Plaquemines Parish, where road closures left some communities isolated.

Some nevertheless hunkered down to ride out the storm, despite mandatory evacuation orders and the risk of dangerous storm surges.

"I think it'll be alright," said 69-year-old mechanic Eddy Gamboa, who is originally from Cuba, but has lived in Louisiana for the last 24 years.

"Category one, I'd say, is not much to worry about. A one? That's a thunderstorm. I'll be back to work Monday," he told AFP.

In New Orleans, residents and business owners were laying down sandbags and boarding up windows while city officials set up shelters for residents.

But local revelers and tourists drank "hurricane" cocktails and sang arm in arm as they walked down Bourbon Street late Friday.

The level of the Mississippi River, already swollen from historic rains and flooding upstream, was at nearly 17 feet (5.2 meters) in New Orleans -- just below flood stage.

River levels are expected to peak at just over 17 feet, according to Saturday's forecast by the National Oceanic and Atmospheric Administration (NOAA).

US Senator Bill Cassidy said officials with the Army Corps of Engineers told him they were "confident" that the 20-foot-high levee system protecting New Orleans, a city of 400,000, would hold.

Mike Yenni, president of Jefferson Parish near New Orleans, said the community had taken the "unprecedented" step of closing hundreds of flood gates, largely due to the high levels of the Mississippi.

In St. John's Parish next to New Orleans, some communities were already under two or more feet of water, local television footage showed.

In 2005, Katrina -- the costliest and deadliest hurricane in recent US history -- submerged about 80 percent of New Orleans, causing some 1,800 deaths and more than $150 billion in damage.

The city's main sports arena, the Superdome, was turned into an emergency shelter during Katrina.

The facility was due to host a concert by the Rolling Stones on Sunday, but it was postponed by a day due to Barry.

"We're here with you -- we'll get through this together," the band said in a statement.