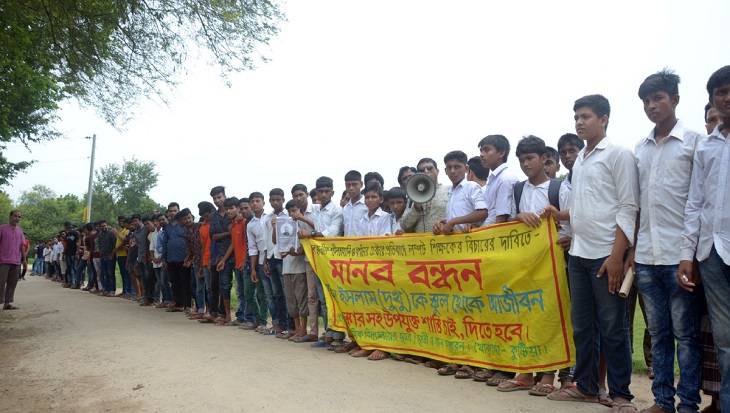 A secondary school teacher in Khoksha upazila of Kushtia was relieved of his post on Saturday after accusations surfaced of him stalking and even sexually harassing female students, reports UNB.

Earlier, the governing committee of the Sengram Secondary School at a meeting held on Saturday afternoon decided to fire the teacher, identified as Nazrul Islam alias Dukhu.

Meanwhile, the guardians and school authority lodged two separate complaints with the local police stations against assistant teacher of the school Nazrul Islam.

Nazrul Islam, who got married seven years ago, has been stalking girls with indecent proposals throughout his time as a teacher.

In the very latest incident on Thursday morning, the teacher called a class-VIII girl to the library of the school and forced her to remove her veil. He then tried to kiss the girl forcibly.

The girl informed the matter to her fellow students. It prompted the students to boycott the class protesting the sexual harassment.

About the submitted complaints, Officer In-Charge of Khoksha Police Station ABM Mehedi Masud said they have received written complaints against disgraced teacher Nazrul Islam, and the matter would be followed up legally.