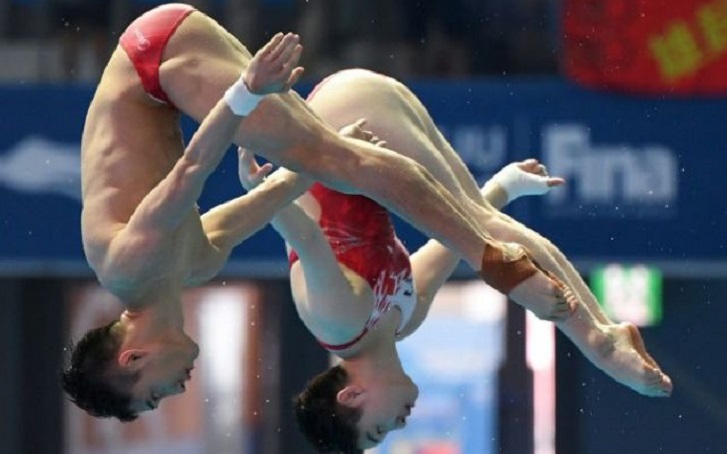 Teenage sensation Lian Junjie and Si Yajie sparked a golden treble for Chinese divers on Saturday by sweeping to victory in the mixed 10-metre synchro final in Gwangju.

Eighteen-year-old Lian retained the title he won with Rio Olympic champion Ren Qian in Budapest two years ago as he and Si racked up a winning total of 346.14 points -- a whopping 35 points clear of their nearest rivals.

For Si, who took silver behind Ren in the women's 10m platform at the 2016 Rio Games, it was a fourth world title.

She captured the 10m gold as a 14-year-old at the 2013 Barcelona championships, won the mixed synchro with Tai Xiaohu in Kazan two years later and partnered Ren to victory in the women's 10m synchro in 2017.

Britain's Robyn Birch and Noah Williams narrowly missed out on a medal in the first of three diving finals on Saturday.

Chen barely made a splash as she breezed to gold in the one-metre springboard with a 285.45 points total, comfortably clear of American Sarah Bacon and South Korean Kim Su-ji, who earned the day's biggest cheer after claiming the host nation's first medal.

Xie and Olympic champion Cao were also too strong for their rivals as they stormed to gold with 439.74 points, with Britain's Jack Laugher and Daniel Goodfellow taking silver and Mexico's Yahel Castillo and Juan Manuel Hernandez the bronze.

All 13 diving events count as qualifiers for the 2020 Tokyo Olympics.