Tamim tuning up his batting ahead of Sri Lanka tour 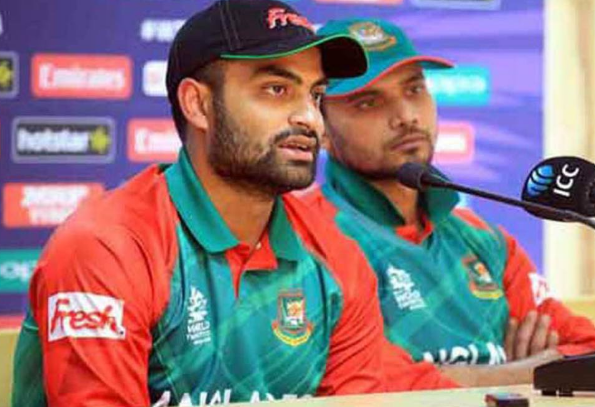 Bangladesh’s dashing opener Tamim Iqbal started tuning up his batting with hard practices at the Sher-e-Bangla National Cricket Stadium in Mirpur on Saturday, ahead of this month’s Sri Lanka tour to play three ODI matches against the Island nation.

Tamim was found very serious and eager in the practice session to get rid of his personal memory of the ICC Cricket World Cup 2019, where he scored just 235 runs with only a fifty playing eight matches.

Farhad Reza delivered a full pitched ball to Tamim Iqbal. The southpaw defended it with a cautious approach. A few deliveries later, Farhad came up with a short ball aiming to beat Tamim, but the left-hander sent it to deep cover with a cannon-like drive at the central wicket of Sher-e-Bangla National Cricket Stadium.

Tamim was one of the best openers in ODI cricket right before the World Cup began in England and Wales. He scored ample runs after Bangladesh’s exit from the Quarterfinals of 2015 World Cup in Australia and New Zealand.

So it was expected that Tamim could bring the Tigers to the semifinal stage this time around in the World Cup. But he failed horribly to make any difference in England. His poor display in the showpiece event badly affected Bangladesh’s overall run as they ended up at eighth in the points table.

This result rarely expresses Bangladesh’s potential in the World Cup, who got great momentum at the start of their campaign beating South Africa in the first game. They had also won a tri-series for the first time right before the biggest cricketing event. But the Tigers failed to capitalise on those the chances.

In the first game, Tamim’s contribution was 16 off 29 deliveries with two fours. In the next game against New Zealand, he made 24 off 38 with three fours. These two innings symbolised what was not expected from the team management of the Tigers. Tamim failed to deliver what was asked to him to make a mark in the World Cup.

However, at the end of Bangladesh’s assault in the World Cup, the most-run scorer in all formats for Bangladesh said: “I have to confess that I failed in the World Cup, but I have the ability to come back strongly. I did it previously, and there’s no reason to not come up with similar performance again.”

Three days after returning home from England, Tamim started to sharpen his bat ahead of Bangladesh’s upcoming tour to Sri Lanka for a three-match ODI series.

He looked eager while batting on the central wicket at Sher-e-Bangla to make his next assignment memorable.

In the last three ODI innings in Sri Lanka, Tamim struck two centuries. The left-hander can get inspired from this stat, and it can also help him to hit Sri Lankan bowlers out of the park with his cannon-powered drives too.

Bangladesh will fly for Sri Lanka on July 20 and they will start the series on July 26 while remaining matches will be played on 28 and 31. All the matches will be held at R Premadasa International Cricket Stadium, Colombo.