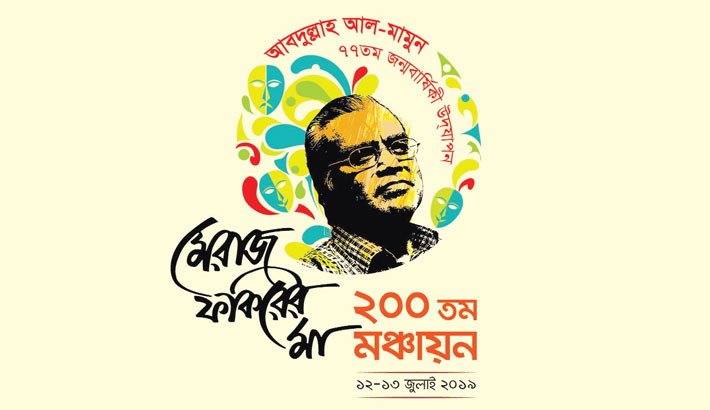 Today is the 77th birthday of director, playwright and actor Abdullah Al-Mamun, one of the pioneers of modern Theatre in Bangladesh.

Theater along with Bangladesh Silpakala Academy has jointly organised a 2-day long programme titled ‘77th Birth Anniversary Celebration of Abdullah Al-Mamun.’ To commemorate the birthday of this great personality, Theatre will also stage the 200th show of ‘Meraaj Fakirer Maa’, written and directed by Abdullah Al-Mamun.

On Friday, the opening day of the programme, Theatre staged the 198th and 199th shows of ‘Meraaj Fakirer Maa’ at 5 pm and 7:30 pm respectively at Jatiya Natyashal of Bangladesh Shilpakala Academy.

And today’s programme will be started by Mamunur Rashid who will deliver Abdullah Al-Mamun Memorial Lecture on ‘Stage Production and Acting in Recent Days’ at Seminar Hall of Shilpakala Academy at 4.30 pm followed by 200th show of ‘Meraaj Fakirer Maa’ at Jatiya Natyashala at 7.30 pm.

Theatre will close the 2-day long programme by honouring to 3 of their artistes  Ferdousi Majumdar, Ramendu Majumdar and Maruf Kabir who have been acting in this play from the beginning to 200th show.

Abdullah Al Mamun is a Bangladeshi playwright, actor and filmmaker. He earned Bangla Academy Literary Award in 1978 and Ekushey Padak in 2000 from the Government of Bangladesh. As a filmmaker, he won Bangladesh National Film Award for Best Director twice for the direction of the films Ekhoni Somoy (1980) and Dui Jibon (1988).

He wrote 25 dramas and seven novels, an autobiography Amar Ami and a travelogue Manhattan.

Mamun was also a filmmaker. He made his debut as a filmmaker with Angikar in 1972. His other notable movies include Sareng Bou (1978), Ekhoni Somoy, Dui Jibon, Sokhi Tumi Kaar and Bihanga.

He wrote stories and songs for films including “Oshikkhito”. His last film Doriya Parer Doulati was released in 2010.