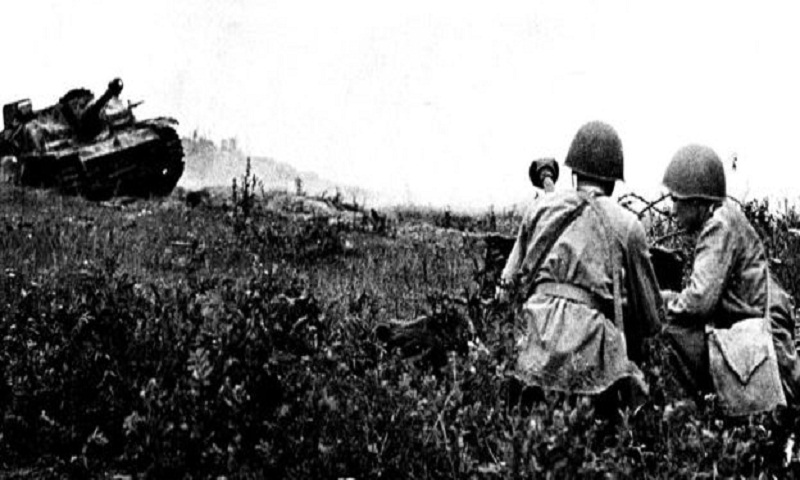 Winning the biggest tank battle in history - against Nazi Germany at Kursk in 1943 - remains a great source of pride for Russians.

So it is not surprising that Russian officials have lashed out at Western historians for questioning the Red Army's mastery of the battlefield.

For decades Russians have seen no reason to doubt Soviet military historians, who portrayed the Battle of Prokhorovka on 12 July 1943 as a turning-point, where the Red Army seized the initiative, then rolled back the Nazi armour.

The wider Battle of Kursk - from 5 July to 23 August 1943 - was indeed a turning-point in World War Two. Soviet forces thwarted a huge Nazi counter-attack, after Adolf Hitler's troops had suffered a colossal defeat at Stalingrad in the winter of 1942-43.

But recently a British historian, Ben Wheatley, analysed German Luftwaffe aerial photos of the Prokhorovka battlefield, taken on 14-16 July, when the area was still in German hands. The photos were found in the US National Archives at College Park, Maryland.

He writes that dozens of Soviet T-34 tanks tumbled into an anti-tank ditch 4.5m (15ft) deep, dug by Soviet infantry, and when the Red Army realised its mistake other T-34s started queuing up to cross a bridge. German tanks were easily able to pick them off at the bridge.

Wheatley and a German military historian, Karl-Heinz Frieser, were cited in a feature in the German daily Die Welt, which hit a Russian raw nerve.

The writer, Sven Felix Kellerhoff, argued that the evidence of Soviet humiliation at Prokhorovka was so convincing that Russia ought to tear down its memorial there, which celebrates the heroism of Soviet tank crews on 12 July.

"Attempts to rewrite immutable historical facts, falsify the events of those years, play down the decisive role of the Soviet people in defeating Nazism and freeing Europe from the 'brown plague', look unworthy and insulting," he said.

The Battle of Kursk

Soviet forces recaptured the cities of Oryol and Kharkov in August

Victory gave the Red Army the initiative on the Eastern Front

There were angry words for Die Welt too in the Russian parliament.

A defence specialist in the Duma (lower house), Alexander Sherin, called on the German authorities to prosecute Die Welt's editor.

The MP said the feature "obliterated the German nation's penance for what was done by Nazi Germany".

Soviet heroism in World War Two has become a theme of Vladimir Putin's presidency, as he strives to boost national pride.

But there is no doubt that Soviet forces suffered heavily at Prokhorovka, even though they were making progress in other sectors of the Kursk front.

But he also said the Germans could have withdrawn their own damaged tanks from the battlefield after 12 July but before the aerial photos were taken. In that case, they would not show up on the photos studied by Wheatley.

The rugged T-34 tank was no doubt an impressive Soviet invention, the backbone of the Red Army.

But Soviet troops were outgunned at Kursk by the heavy German Tiger tank, clad in 12cm-thick (4.7-inch) armour, and the new mobile Ferdinand artillery gun.

War photographer Anatoly Yegorov was in the thick of the fighting at Kursk. His nephew Mikhail Yegorov spoke to the daily Moskovsky Komsomolets, recalling what Anatoly told him about his work there.

"Most of those photos were not published. 'Do you know why no panoramic photos of the Prokhorovka battlefield were ever shown in our country?' my uncle asked me. 'Because for every burning Tiger there were 10 of our smashed up T-34s! How could you publish such photos in the papers?'"

Anatoly told his nephew that sometimes a skilled Soviet sniper could stop a Tiger by shooting the driver through the tank's vision slit. The crew would then clamber out. Hardly anything else could stop a Tiger.

The Prokhorovka controversy shows just how sensitive the war remains for Russians - a war that claimed more than 20 million Soviet lives.