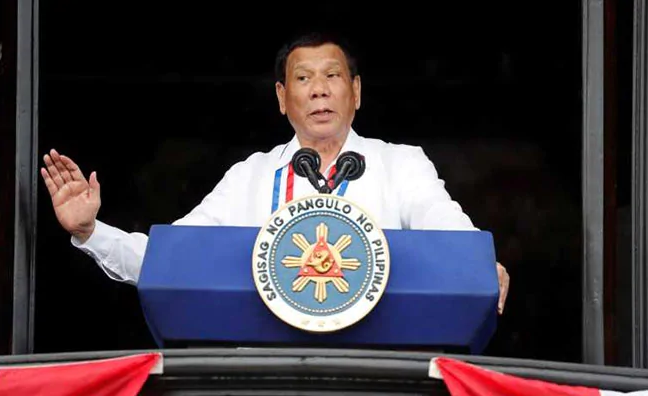 Philippine President Rodrigo Duterte Friday branded as "idiots" the governments behind a UN rights body investigation into his narcotics crackdown that has killed thousands and drawn international censure.

Duterte's three-year drug war has unleashed a surge of bloodshed in the Asian nation, with reports of nightly slayings of suspects by police and masked gunmen.

The UN Human Rights Council on Thursday narrowly passed a resolution spearheaded by Iceland which gives UN High Commissioner for Human Rights Michelle Bachelet a year to conduct a "comprehensive" international review of the campaign, a centrepiece of Duterte's presidency.

"These sons of wh***s cannot understand that we have a problem," Duterte said in a speech to corrections officers, in his first comments on the resolution.

"Iceland, what is Iceland's problem? Just ice. That's your problem. You have too much ice and there is no clear day or night there."

"So you can understand why there is no crime. There is no policeman either... These idiots, they don't understand the social, economic, political problems of the Philippines."

Manila says police have killed 5,300 drug suspects who resisted arrest, rejecting the estimates of rights groups who say the crackdown -- that remains popular with many Filipinos -- has left more than 20,000 dead.

"You just do your duty in accordance with the constitution and you do not have to worry about cases. As long as they are job-related they're on me," he said.

He had said ahead of the vote that he would consider allowing UN rights staff into the country, but made no mention of this in his comments Friday.

Philippine Foreign Secretary Teodoro Locsin has rejected the resolution and warned "there will be consequences" for those countries who backed it.

Rights groups have hailed the UN vote as providing hope to the families of the dead suspects as well as for those who have challenged Duterte's policies.

The drug war, launched in 2016, is Duterte's signature initiative, and he has often reacted with fury when outsiders have raised concerns about it.