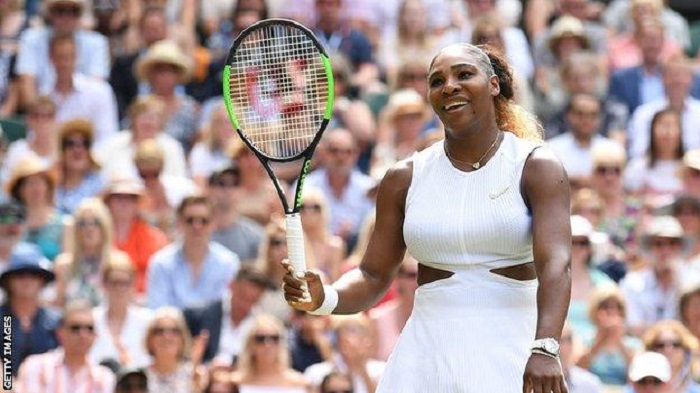 Serena Williams made light work of Barbora Strycova to reach the Wimbledon final and stand one win away from a record-equalling 24th Grand Slam title.

The American was just too powerful for the Czech in a 6-1 6-2 win that set up a final against Romania's Simona Halep.

Williams, 37, said she tried to "tap into that younger Serena" in a dominant display that will make her the oldest Grand Slam women's singles finalist.

She took just 59 minutes to win and continue her bid for an eighth title.

"It feels good to be back in the final," said Williams, who was runner-up to Angelique Kerber last year and will be appearing in the grass-court showpiece for an 11th time on Saturday.

Williams proves too much for veteran debutant Strycova

Williams is aiming to draw level with Australian Margaret Court's all-time record of 24 Grand Slam singles titles and also win her first major title since becoming a mum in September 2017.

In 33-year-old Grand Slam semi-final debutant Strycova, she was facing a player she had met three times before without dropping a set.

And she was not going to spoil that record here, establishing breaks in the fourth and sixth games before taking the set with her 44th ace of the championships.

While Williams is a firm favourite on Centre Court, the crowd wanted to see more of a match and cheered every half chance, net cord or winner that went Strycova's way.

But despite the support, the world number 54 seemed lost in the occasion and unable to turn to the serve-and-volley game that had served her so well in the dismantling of British number one Johanna Konta in the quarter-finals.

She raised her arms ironically in celebration at winning a rare long rally for 0-15 when Williams was serving for the match but soon found herself shaking hands at the net after the American delivered a forehand winner on her first match point.

Williams said she had thought back earlier that morning to her first Wimbledon triumph in 2002, when she beat her sister Venus in the final, and that it had inspired her.

Williams, whose season had been disrupted by injury and illness, teamed up with British former world number one Andy Murray in the mixed doubles at Wimbledon this week.

And, as well as providing a crowd-pleasing partnership until their last-16 exit, it turns out it has also helped her singles game.

"I promise you, when I hit a volley I was like, 'would I have made that if I didn't play doubles?' I don't think so," she said.

"I kept telling you guys I thought the doubles would help me. I really think it did. I don't attack the net that much. I tried to and I want to."

Williams sets yet another record

Williams is now into a Grand Slam final for the 13th consecutive year - and that includes being on maternity leave during that time.

She pulled out of three consecutive tournaments this season because of injury or illness and this is the first major final she will contest this year, having lost in the quarter-finals of the Australian Open in January and the third round at the French Open.

"It's good, especially after my year," she said.

"I just needed some matches. I know I'm improving and I just needed to feel good and then I can do what I do best which is play tennis."

At 37 years and 291 days, she will on Saturday overtake Martina Navratilova (37 years 258 days) as the oldest Grand Slam women's finalist in the Open era and remains as motivated as ever.

"I love what I do, I wake up every morning and I get to be fit and play sport and play in front of crowds like here at Wimbledon - not everyone can do that," she said.

"I'm still pretty good at what I do and it's always an amazing experience."

Williams won the most recent of her Grand Slam titles at the 2017 Australian Open when she was eight weeks pregnant.

She returned to the Tour in March 2018, saying she had "almost died" giving birth to her daughter, and has reached three Grand Slam finals since.

Having lost in last year's Wimbledon and US Open finals, she will now hope it will be third time lucky on Saturday (14:00 BST).

Nine-time Wimbledon singles champion Martina Navratilova on BBC TV: "The crowd didn't necessarily want Serena to lose. They just wanted to see more of her. Strycova wasn't able to handle the power. How quickly was Serena getting on those balls though? She did her homework and it paid off. She was firing on all cylinders."

Two-time Grand Slam champion Tracy Austin on BBC TV: "Strycova never felt like she had any time to react. Look at the way Serena was able to manipulate that ball and get it up and down. There was so much consistency. She is locked in.

"Serena's serve is hard and it's powerful. How can you defend when it's that powerful and near the sidelines? I think the mixed doubles [with Britain's Andy Murray] really helped as well. It brought her intensity up. She had three matches with Andy and we know how intense he is."