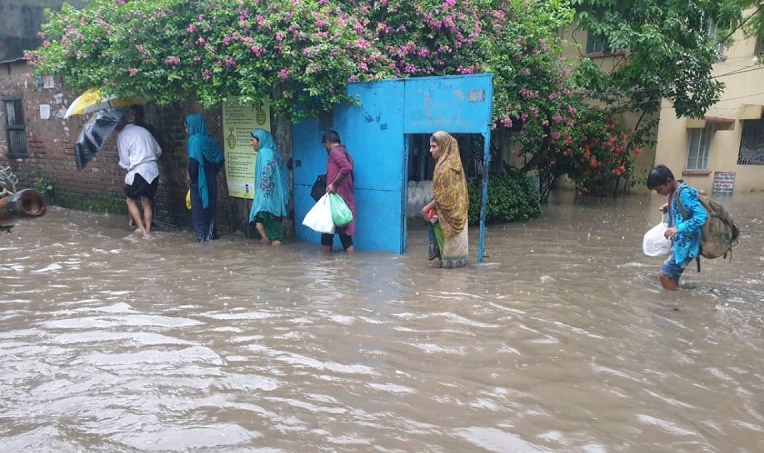 City dwellers on Friday witnessed heavy rainfalls triggered by monsoon that inundated many parts of the capital, inflicting sufferings on commuters.

Although people faced less traffic jams on city streets due to weekend, rainwater submerged many roads and lanes in different areas of the capital, where digging roads during monsoon is a common scenario.

Roads in a number of areas, including Rampura, Banani-11, Mirpur-10, Shewrapara, Kazipara, Mirpur-13 and many roads in cantonment area went under ankle-deep water amid the downpour that started in the morning.

Many people were seen wading through filthy water to reach their destinations.

The situation turned worse in areas like Malibagh and Rokeya Sharani where road renovation works and different development projects, including the Metro Rail one are underway, causing sufferings to the residents living in the adjacent areas.

Besides, knee-deep water was seen on Mouchak-Moghbazar flyover due to absence of any system to drain out rainwater.

Low-income people, especially the day labourers, suffered much as rain disrupted their normal pace of life.

Most of them to stay indoors due to the inclement weather.

According to the Met office, the axis of monsoon trough runs through Rajasthan, Horiyana, Uttar Pradesh, Bihar, West Bengal to Assam across northern part of Bangladesh.

One of its associated troughs extends up to North Bay. Monsoon is active over Bangladesh and moderate over North Bay.

Light to moderate rains/thunder showers accompanied by temporary gusty wind are likely to occur at most places over Dhaka, Mymensingh, Rajshahi, Rangpur, Khulna, Barishal, Chattogram & Sylhet divisions with moderately heavy to very heavy falls at places over the country.