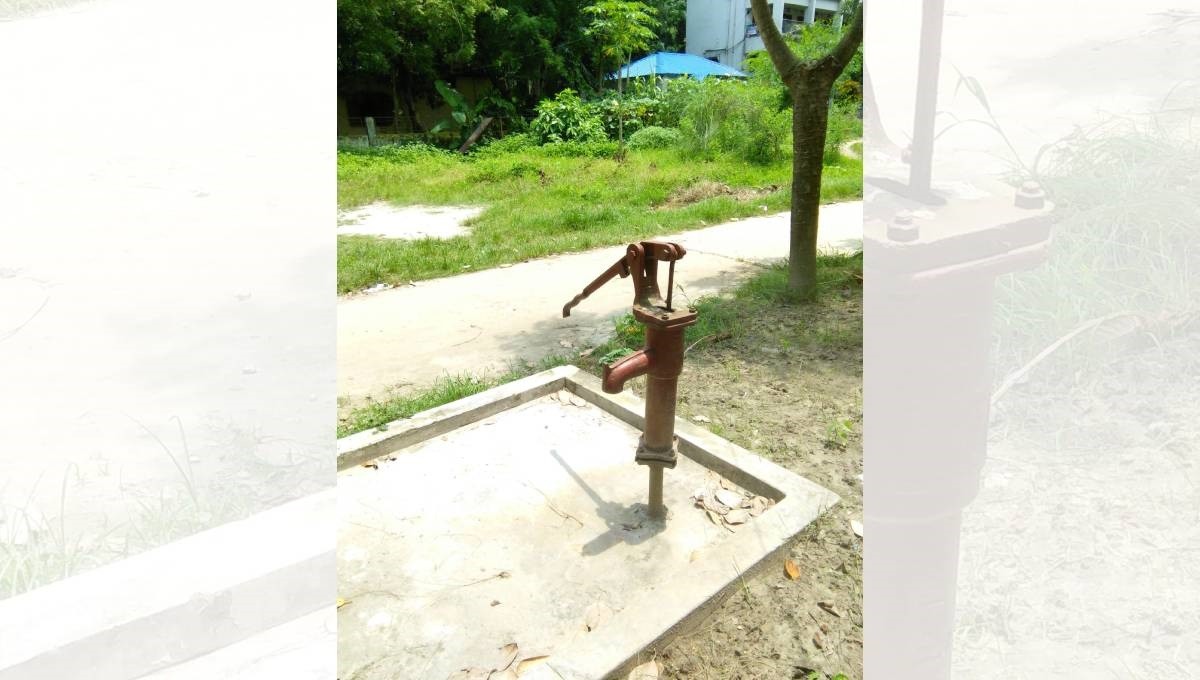 It is not about a single tube well that would go out of order and could be fixed soon. Imagine a village dependent on groundwater, where one day residents wake up to find not 1, 10, or 20 but rather 2,000 tube wells together have been rendered useless to the task of lifting water.

The situation can easily be estimated in the densely populated suburban upazila.

Tube wells of 400-feet depth underground in 9 unions in the upazila went out of order due to a fall in the groundwater level, as well as its depletion.

The situation has created havoc as well as immense sufferings to local people.

In this middle of monsoon season, several ponds have dried up and people fetch water from the local mosque and madrasah for daily use and to feed their livestock, he added.

Sheikh Shamim Uddin of Shuvadda Union’s Ganderia village said, “I used to lift water to a tank on my two-storied building using submersible pump in only 30 minutes, now it takes more than two hours to lift the same amount of water.”

He further said, “I had to pay Tk 2,000 for electricity bill previously but it has increased to Tk 4,500 now which is like putting salt on the wound.”

Upazila Parishad Chairman Shahin Ahmed said his administration installed 48 submersible pumps with pipes of 4-inch diameter reaching 150 feet further down than the tube-wells that fell out of use, i.e. a total of 550 feet, in June as an emergency measure.

This was taken as a temporary step to circumvent the crisis, and so it proved. Some residents of the area enjoyed relief for some time, but in the space of barely a month, most residents are back in the throes of a severe water crisis, Shahin explained.

Deputy Engineer for the Department of Public Health Engineering’s Keraniganj office Shahabuddin said, “The 400 feet deep tube wells can no longer extract water as the groundwater level dropped beyond their reach, by almost 4-5 feet.”

Shahabuddin is quick to pin the blame on climate change.

“The drop in groundwater level was due to climate change. Most of the important ponds in the area dried up as well,” he said.

Engineer Shahab suggested any locals who want to install new tube wells with their own initiative should go for the pipe of 4-inch diameter, and depth of minimum 600 feet, as the groundwater level may have dropped further.

Locals said installing each tube well then would cost upwards of Tk 1.5 lakh and this is beyond their capacity.

KeraniganjUpazilaNirbahi Officer Shah-e-Elid Mainul Amin said, already 48 tube wells with submersible pumps have been set up in 12 unions and 62 more will be installed soon.

People in dire need of immediate assistance demanded the authorities do something through whichever official body – be it the Public Health Engineering Department, Unicef or whoever, to help them overcome the present crisis.

State Minister for Power and Energy and MP of Dhaka-2 constituency, Nasrul Hamid said, “Groundwater level has been going down every year due to climate change. On the other hand, water level in rivers and oceans are rising.”

“The government has already established 40 kilometer long underground pipeline on Dhaka-Mawa highway to fetch water from Padma River in Munshiganj, a project courtesy of the Japan International Cooperation Agency (JICA).”

The capital’s water supply, including Keraniganj, could be well-served by such a pipeline, minister added.

The government has also extended the pipeline network from six nearby rivers successfully up to Babubazar in the capital to supply water.

Hamid also delivered the first good news of the day for the suffering masses, by disclosing that Wasa will be able to supply water to Keraniganj by 2020, after finishing all the work to establish a pipeline network in the capital by 2019.