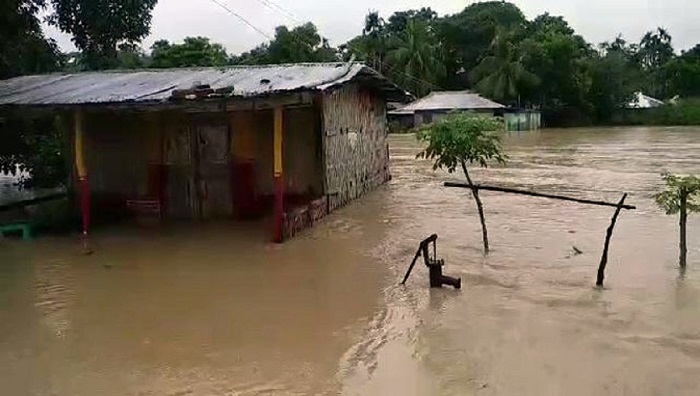 Incessant rain for the last few days and onrush of water from the upstream inundated low-lying areas in Baghaichhari upazila, leaving over 1,000 people marooned.

Besides, the flood control embankment of Baribindughat was partially damaged.

Upazila Nirbahi Officer Md Ahsan Habib said the upazila administration has opened 24 shelter centres fearing the situation might worsen as water of Kachalong River continues to rise. Food will be arranged for those who will come to the shelters.

“The low-lying areas are being inundated quickly. Many more areas are likely to be flooded if the rainfall does not decrease. On the other hand, relief materials didn’t reach the affected areas due to strong current of the river,” he added.

The areas are facing shortage of pure drinking water. About 300 people took refuge at the shelter centres after those were opened by the administration. Many others took shelter at houses of their relatives.

Baghaichhari Municipal Mayor Jafol Ali Khan said: “The people became marooned at various places of the municipality. Locals are facing acute shortage of drinking water because the tube-wells were submerged.”

Upazila parishad chairmen are arranging food at the shelter centres in their respective areas.