IOM scales up activities as 22,000 Rohingyas affected in rain 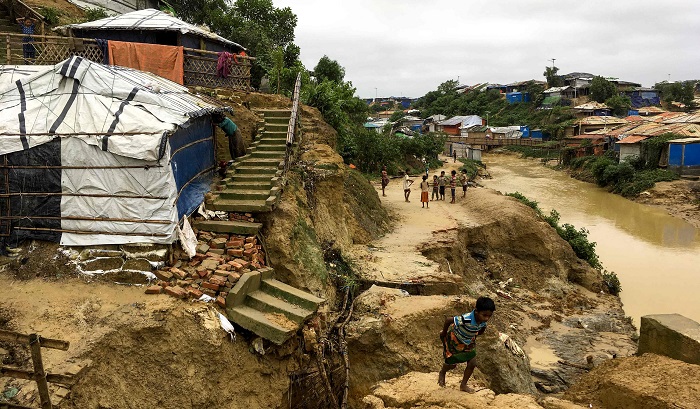 An estimated 22,000 Rohingyas were affected since the beginning of July as rain and storm batter the cramped camps.

The situation is worse in this monsoon compared to 2018. The total number of Rohingyas affected in July last year was 19,000.

In a report, the Inter Sector Coordination Group (ISCG) said that at least 5,600 individuals have already been displaced this year in the monsoon.

Unrelenting rain and winds have been damaging homes and infrastructure, increasing the risk of waterborne illnesses among the Rohingyas living in makeshift houses.

“The rain and wind are causing misery on the ground and our teams are working day and night to provide emergency services and relocate the affected people,” said Manuel Pereira, International Organisation for Migration (IOM) Bangladesh Deputy Chief of Mission.

He said they are grappling with the immediate effects of the storms but have to remain focused on long-term disaster management. Pereira noted that IOM has supported nearly 6,000 people with emergency items and trained 570 in emergency response since late 2018.

“We recognise that this storm system is having a major impact on the people in the camps and we’re only half way through the monsoon season,” he said.

In the last 48 hours, IOM teams distributed 5,079 plastic tarpaulins to families affected by heavy rain. A total of 152mm of rain was recorded at Kutupalong in the past 24 hours, IOM said in a statement.

IOM is continuing to assist affected communities as needed with its humanitarian partners. If the inclement weather continues, there will be worsening damage to paths, bridges and drainage systems in the camps.